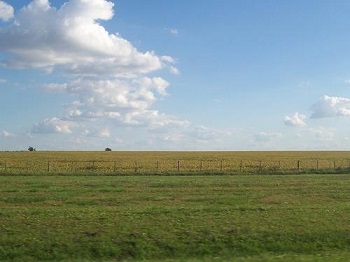 The pampas are the Argentinian quintessential landscape, both in fiction and reality: a really flat (a perfect horizontal line of nothingness) and extremely wide (almost 800 kilometers of nothingness from Buenos Aires to the city of Córdoba... and we aren't counting Uruguay or anything to the south of the well-known Capital of Brazil...) endless grassland.

But actually, this is one of the most developed, fertile and productive lands in all the country, and one of the richest fields all over the world. This land is now very valuable, as the Argentine economy strongly depends in the soy and cereal crops, and the cattle.

Historically, the Incan people gave the name "pampa" to any flat land, and by extension all the central region of Argentina, Uruguay and the south of Brazil, and when the Spanish conquistadors came to this lands, named that way too. It was a scarcely inhabited region, mainly by hunters/foragers or fishers of the Guaraní family that dwelled near the rivers. This people welcomed and helped the first founders of Buenos Aires. But, due the finesse of the Spanish colonizers, that didn't last too long...

After the epic fail of the first foundation, that according to the landsknecht Ulric Schmidl ended with unusual gastronomy and the foundation of Asunción del Paraguay, the city of Buenos Aires was founded again, and the region slowly gained population. Also, the first colonizers freed many horses and cows in the region, that begin to reproduce insanely fast thanks to the lack of natural predators and the abundance of food (grass); and also, the settlers planted many trees near the population centers, hoping to create visible landmarks in an otherwise unremarkable region.

(there were prior revolutions across the Americas, like the Tupac Amaru's revolt, but they didn't prosper), and became the central point of the South American revolution.

In fiction, the pampas are a wild and lawless territory, populated by brave Gauchos, skillfull and honourable riders and cattle-herders; or fearsome banditos, malevos (depending on the author) and murderous Indians. This perhaps was partly Truth in Television in the past, but today the pampas are mostly vast farmlands owned by the argentine oligarchy, highly man-modified, and interrupted by huge cities like Buenos Aires and Rosario, and medium towns like Paraná and La Plata in Argentina. Uruguay, on the other hand, is entirelly part of this region, with many characteristics (geographical and cultural, economical and historical) shared with Argentina.

This trope is for sure Older Than Radio, and most probably Older Than Steam, as the origins of the name date from the Incaic empire, and it was (sort of) present in the conquest chronicles (like the works of Ulrich Schmidl) and early poetry. As a side note, in many early works, as the Facundo, "the pampas" were more generically called "el desierto" (The Desert). But "pampas" is more widely recognized as the Argentine "desert" -not in the sandy, hot and dry meaning, but the not-a-fucking-soul one-, as even one province note according to many people the most depressive place in the world is called "La Pampa".

This trope is very, very common in the Argentine Literature, and shared by many works depicting the South Cone countries. Compare to The Savage South; contrasts with Latin Land and the Mayincatec conceptions of Latin America and misconceptions like The Capital of Brazil Is Buenos Aires.