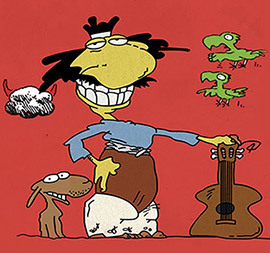 One of the most long-running, famous and beloved comic strips in Argentina, Inodoro Pereyra was created by el Negro Fontanarrosa as an Affectionate Parody of Martín Fierro.

The comic is about the life of a lonely, lazy and ugly Argentinian gaucho living in the Argentinian Pampa with his talking dog and ugly wife. The character introduces himself saying: “I'm Pereyra by my Mom, and Inodoro (meaning ‘toilet’, used ironically due to his father's profession) because my Dad was a sewage worker.”

This work shows examples of these tropes: