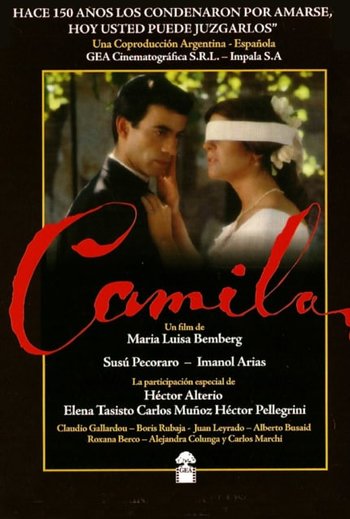 Camila is a 1984 film from Argentina, directed by Maria Luisa Bemberg.

It tells the Real Life story of Camila O'Gorman

. Camila is a 20-year-old socialite living in Buenos Aires in 1847. Her father wants to marry her off to a dull aristocrat, but rebellious Camila, who likes to read banned books, dreams of marrying for love. Camila is also rebellious in that, unlike her father, she opposes the oppressive dictatorship of military strongman Juan Manuel de Rosas

Into this mix comes Father Ladislao Gutiérrez, a handsome young Jesuit priest. Camila notices his handsomeness, but she is really impressed when Ladislao gives an impassioned sermon opposing the murders and other abuses of the Rosas regime. Their mutual attraction develops into a full-blown love affair, despite Ladislao's overwhelming guilt about breaking his vows. Eventually, the young lovers run away together, but tragedy strikes.