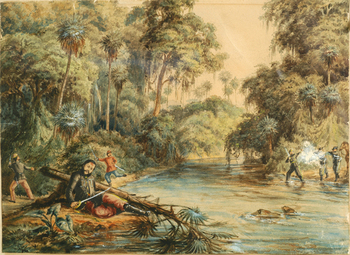 The War of the Triple Alliance (1864-1870), also known as the Paraguayan War, was fought between Paraguay and an alliance of Argentina, Uruguay and the Empire of Brazil. It was a conflict with more deaths than any other in the history of Latin America, with estimates of 90,000-100,000 deaths on the alliance and circa 300,000 Paraguayans, both soldiers and civilians. There are a lot of speculations of the war’s motives, including British economic interests in the region, post-colonialism effects and expansionist goals of Paraguay’s president Francisco Solano López.

Brazil was getting too involved in Uruguay’s internal politics and eventually invaded it, making Paraguay, Uruguay's political ally, declare war on Brazil. When López tried to pass through the province of Corrientes, and having lost his Uruguay allies, Presidents Aguirre and Berro to a Brazilian-led coup, Argentina declared war on Paraguay and the three countries forged an alliance to fight López’s regime. This turned the tide of the war; Paraguay's army, despite having some victories against Brazil in the beginning, devolved into guerrilla warfare in its own territory. The war only ended with López’s death.

The war ended catastrophically for Paraguay, having lost almost 90% of the male population and a big part of its territory. Apart from the battle casualties, the isolation from foreign aid and deprivation of basic sustenance caused massive casualties due to famine and disease. To this day, no other country has lost as many people to war proportionally to their total population as Paraguay did. Brazil and Argentina had an increase of public debt that took decades to pay, but it brought some Brazilian slaves’ freedom (some of them were freed to fight in the war, although slavery would only be fully abolished in Brazil 18 years after the end of the war). Uruguay, on the other hand, was finally free of its neighbors’ meddling (kind of), but still had its own internal problems.

To this day, there are still consequences of the war felt on the four countries involved, especially due to politics and ideological revisionism initiatives brought along by the Paraguayan dictatorship of the mid-late 20th Century, which controversially sought to bring the image of Solano López as a patriot, a visionary and a hero of the Paraguayan people, and after the Falklands War, to include in the narrative the aforementioned possible British intervention that led to the war.