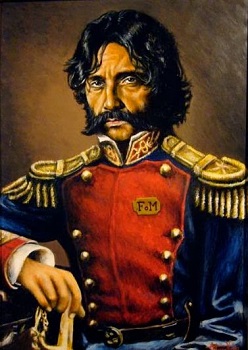 Facundo, o Civilización y Barbarie note "Facundo, or Civilization and Barbarism", by the former Argentine president, writer, military and journalist Domingo Faustino Sarmiento, is an odd example of the politically messed up times in the early Argentinian history. Somehow, it's an Ur-Example of a Non-Fiction novel, a journalist investigation and the very proof that journalism is never objective, nor free of a biased ideology.

Part biography, part journalistic investigation (after all, it was published in a political journal in Chile while Sarmiento was exiled there), part political pamphlet and part novel, this odd mix of a work is considered one of the basis of the Argentine Literature as well as an historic document.

(It should be noted Sarmiento himself is a controversial figure, both praised by the Educational Revolution that (at the time) practically elliminated analphabetism in Argentina and granted the right of free, state-run Elementary schooling, and questioned by his racism and xenophobia, and for his controversial ideas about the "barbarian" population of Argentina. Hell, even contemporary works like Martín Fierro are critical of his domestic policies.)

Facundo is a work about a popular "caudillo" (a type of local strongman and landholder) and "prócer" of the Independency: Facundo Quiroga, governor and general of La Rioja province, and his controversial relationship with the Buenos Aires' governor, Juan Manuel de Rosas. Sarmiento even points a plot to assassinate Quiroga originated in Buenos Aires, specifically in Rosas' office, that ultimately succeed.

In the first half of the work, Sarmiento goes all Tsundere about Facundo Quiroga, praising his bravery and physical skills, but attacking his "barbarian" and "brutal" personality: the "Argentinian" temper, as he dubs it, citing other political figures like General Lavalle and really though guy note he was stabbed nearly sixty times and shot at least another three in the same battle, and survived General Lamadrid. The second half is about Rosas, almost exclusively an attack about his methods to bring peace, and a lament about how the French and English navy couldn't stop him when they had the chance.

This work contain examples of the following tropes: