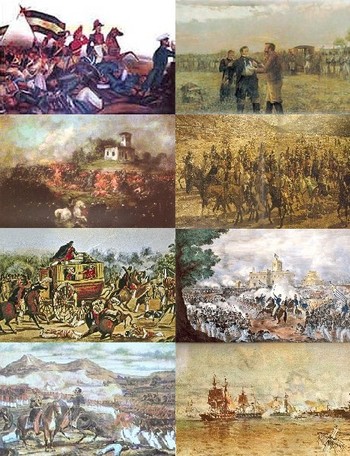 Initially, we had the Viceroyalty of the Río de la Plata, a domain of the kingdom of Spain which comprised a good part of southern South America. The capital city was Buenos Aires and all commerce had to go through that port. Most other cities did not like that state of things, but being part of a kingdom there was little they could do about it. Then the Spanish American Wars of Independence started, and all hell broke loose. As the king of Spain was captured by Napoleon, Buenos Aires made the May Revolution to remove the viceroy and place an autonomous Junta in its place (see the other useful notes for context on that). The country was now named "United Provinces of the Río de la Plata". This started a side conflict, different from the one of the options between being independent or remaining part of Spain. Once everybody agreed to cut ties with Spain, why remain under the government of Buenos Aires? Why not become smaller but fully independent nations? And even if remaining under Buenos Aires' leadership, should it still be a relation akin to that of a monarchy (or even an actual local monarchy), or should it be a Federation, similar to the United States of America?

Three territories were lost as a result of the war of independence. Paraguay defeated the armies sent by Buenos Aires, but being a highly isolationist area, they made a deal: Buenos Aires would not try to lord them, as long as they stayed away from the war and do not aid the Royalist forces. This started the de-facto independence of Paraguay, that would eventually become formal decades later. The Upper Peru was a disputed territory that was conquered and liberated by both sides (the Patriots from Buenos Aires at the south and the Royalists from Peru at the North); and eventually liberated by another Patriot army led by Simón Bolívar. Upper Peru became Bolivia, also an independent nation. The Banda Oriental started as a Royalist stronghold, eventually defeated by Buenos Aires. However, Artigas was a strong vocal supporter of federalism and became a big headache for Buenos Aires. The territory, ambitioned by Portugal since the early days of colonization, was attacked by the Portuguese colony, and received no aid from Buenos Aires.

government; it is unrelated to religious unitarianism. The Congress of Tucumán crafted a Constitution in 1819, but most provinces rose against Buenos Aires and defeated the province in the Battle of Cepeda. This started the "Anarchy of the year 20", a period when the provinces operated defacto as countries and there was no central government. There was a new attempt to reunite the country in 1826, but the new centralist constitution was rejected as well by the other provinces. Bernardino Rivadavia became the first president of Argentina.

Remember the Banda Oriental? It became a problem again. The Portuguese (who later also declared independence from Portugal and became Brazil) had renamed it as "Cisplatina". An insurgent movement, the "33 orientales", seized control of it and proclaimed that they cut ties with Brazil and rejoin the United Provinces. This, of course, led to an open war between both countries. Rivadavia had to resign during this period, the Constitution was repealed, and the war was continued by the federal Manuel Dorrego (who was appointed just governor of Buenos Aires; the country lacked a head of state once more). In the diplomatic negotiations after the war, it was arranged that the disputed territory would not return to either country, but became instead a new country, Uruguay. Uruguay would have a civil war of its own, between the Blancos (=Federales) and the Colorados (=Unitarians)

This result was not liked by the veterans of the war. The Unitarian Juan Lavalle, who had returned from the war with his armies, deposed and executed Dorrego, appointed himself governor, and closed the legislature. The rancher Juan Manuel de Rosas gathered the dispersed Federales of the province, retreated to Santa Fe, and counter-attacked. Lavalle was deposed, but his general José María Paz continued the war at other provinces. The federales pursued and captured him, and liberated all provinces from the Unitarian rule. Rosas was appointed governor of Buenos Aires. Those federal provinces united under the Federal Pact: for the time being, and until a new constitution was written, the provinces would be autonomous and delegated the international diplomacy to Buenos Aires.

As things calmed, Rosas resigned and waged war against the Indians in the south. The Federal governor Facundo Quiroga was killed by bandits in unclear circumstances, so Rosas was appointed governor once again, with dictatorial powers. He declared war of the Peru-Bolivia Confederation, for giving refuge to unitarians, and France in turn declared war on the Argentine Confederation in support of Peru-Bolivia. To further their agenda they deposed the Blanco president of Uruguay, Manuel Uribe, and placed the Colorado Fructuoso Rivera so that he waged war against Rosas and helped to depose him. But things did not go as expected. The Peru-Bolivia Confederation lost a war with Chile and broke up, the army sent from Uruguay against Rosas was too small and the people did not riot against him as expected. France eventually gave up the naval blockade. Lavalle escaped to the North and was eventually killed; his soldiers took his corpse to Bolivia to escape from the federales.

Rivera was defeated by Oribe, but France intervened once again to prevent him from entering to Montevideo. There was a new naval blockade against Buenos Aires, this time by both France and the United Kingdom. They tried to navigate to Paraguay and back through the Parana river, defying Rosas, but the convoy was destroyed. Both countries signed peace agreements. But then, federal governor Justo José de Urquiza turned against Rosas. His army defeated Oribe's in Uruguay, and then defeated Rosas in the battle of Caseros, who fled to the United Kingdom.

Urquiza called a constituent assembly to write a constitution, but Buenos Aires seceded from the Argentine Confederation and became a state of its own. This situation lasted for a decade, until Bartolome Mitre defeated Urquiza. Buenos Aies rejoined the country and accepted the 1853 constitution, but under its own terms. Mitre was the first president of the unified country. The next presidents, Sarmiento and Avellaneda, ended the last pockets of federal resistance. Julio Roca ended the civil war for good in 1880, by defeating the last attempt to secede Buenos Aires by Carlos Tejedor.