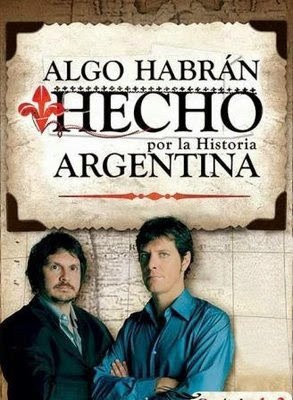 History is full of lies... and those are the guys who will set things right.
Advertisement:

Algo habrán hecho por la historia argentina ("They must have done something for the history of Argentina") is an Argentine documentary that explains the history of Argentina. It is presented by historian Felipe Pigna, who explains things, and entertainer Mario Pergolini, who acts as the Audience Surrogate. The narrating jumps between scenes of Pigna explaining things to Pergolini at the historical sites of the events being mentioned, and brief dramatizations of the events (sometimes with Pigna and Pergolini being in the middle of them as they unfold).