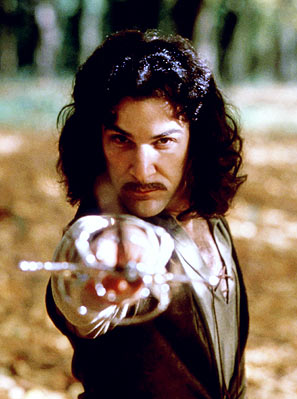 For your sake, let's hope you didn't kill his father.
Advertisement:

A cousin of the Imperturbable Englishman and Awesome Aussie, the Dashing Hispanic is a Stock Character that rose to popularity with the success of codifying franchises like Zorro. Almost always an Anti-Hero (with the occasional Anti-Villain), this character is a rogue, skilled with their weapon of choice be it sword, gun, bow or even their own fists, and either Hispanic in origin or that setting's equivalent.

They are charmers, always witty and quick-thinking, and popular with the ladies. Their fighting styles are more about being athletic and striking with finesse than clumsy swings or wild shots, and their actions are governed by a strict code of honor they adhere to. They usually have a habit of swearing vengeance on someone who's wronged them, and God help anyone who gets in the way of their revenge. Expect this trait to be played up in parodies.

Bonus points if he shares a name with a conquistador or an iconic Spanish author, if his Leitmotif sounds like Carmen on

, or if other characters literally call him "the Spaniard." May also be a Latin Lover. Will probably make use of Gratuitous Spanish. If male, his love interest is almost inevitably a Spicy Latina.

If the work itself is created by a Hispanic creator for a Hispanic audience, this trope becomes incidental. While the character may read as such to an Anglophone audience, in its intended context he was merely a hot person.

The Major Circuit champion, a bullfighting ladies man whose theme is the overture of Carmen.

The Major Circuit champion, a bullfighting ladies man whose theme is the overture of Carmen.