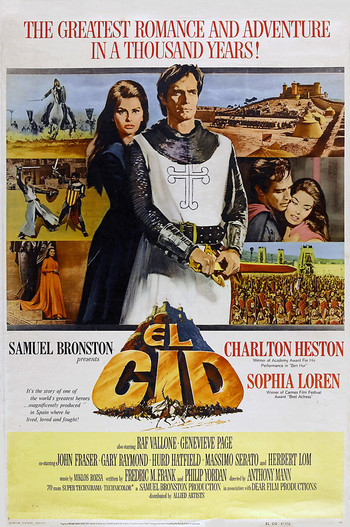 "In my country, we have a name for a warrior with the vision to be just and the courage to show mercy. We call him... the Cid!"
— Moutamin
Advertisement:

It is an adaptation of the stories around Don Rodrigo Diaz de Vivar, a.k.a. "El Cid" (the Lord in Spanish). The real Rodrigo Diaz seems to have been a very successful soldier of fortune who served both Christian and Muslim kings without distinction in eleventh century Spain, eventually leveraging his military skill into a fiefdom in the then-mostly Arab/Berber city of Valencia. After centuries of multiple authors retelling the tale he became the Muslim slaying hero of the Reconquista. In this version Rodrigo is a multi-culturalist, working for a union of Christians and Spanish Moors against an invasion by ferocious Berbers.

As per the source material, Rodrigo Diaz's (Charlton Heston) life gets complicated after he kills his bethroted's father in an informal duel. Needless to say, Jimena (Sophia Loren) takes this badly. In accordance with the best medieval ideals of vendetta, she makes an earnest effort to have Rodrigo killed. As Rodrigo is now the King's champion, replacing Jimena's dad, his majesty takes exception to this and thinks it's a fine idea to make the couple marry after all. Jimena chooses the wedding night to confess that she was party to an underhanded attempt to murder Rodrigo. Hurt but understanding he makes no attempt to consummate the marriage. This does nothing to help Jimena's state of mind as she is deeply in love with her husband, father killer or no.