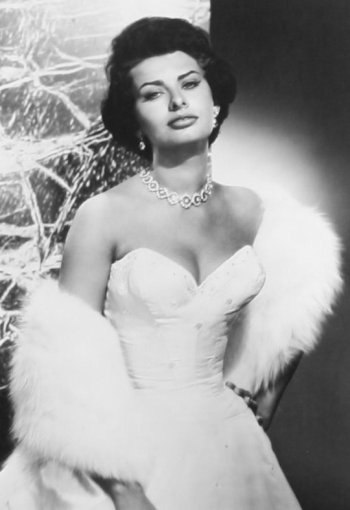 "A woman's dress should be like a barbed wire fence: serving its purpose without obstructing the view."
"There is a Fountain of Youth: It is your mind, your talents, the creativity you bring to your life and the lives of the people you love. When you learn to tap this source, you will truly have defeated age."
Advertisement:

Sofia Villani Scicolone (born September 20, 1934 in Rome, Italy), better known as Sophia Loren, is an Italian-born actor (although now a French citizen, living in Geneva), known for both her sultry looks (keeping her figure even now), and dramatic talent.

She was the first Academy Award winner for Best Actress in a foreign-language role. She was also very busy, acting in loads of films from the '50s through the '70s, and only slowing down in the '80s (even turning down the role of Alexis Carrington in Dynasty) to raise her kids and focus on other work (both entrepreneurial and humanitarian).

When similarly curvaceous Jayne Mansfield sat down at Sophia Loren's table, Loren gave her a side-eye so famous that there's a whole Wikipedia article

about it. She has long been aware of her sexy image, even spoofing it in some of her later roles. In 2006, she was selected as one of the eight people to carry the Olympic Flag at the Opening Ceremonies of the XX Winter Olympic Games in Torino. In 2007, she posed for a calendar in nothing but a swimsuit, and was apparently asked why she didn't pose nude. She said that "When Sophia Loren is naked, that is a lot of nakedness". At the age of 75, she took a spill when walking the red carpet at an event in Hollywood. She wasn't injured, but the fall did flip her skirt, revealing legs that were the envy of women one-third her age.

Fun fact: Her sister married Benito Mussolini's son, and her niece Alessandra Mussolini—who did at one point pose nude, for the Italian edition of Playboy no less—is a member of the European Parliament and was at one point a leading far-right politician in contemporary Italy. This amuses everyone.