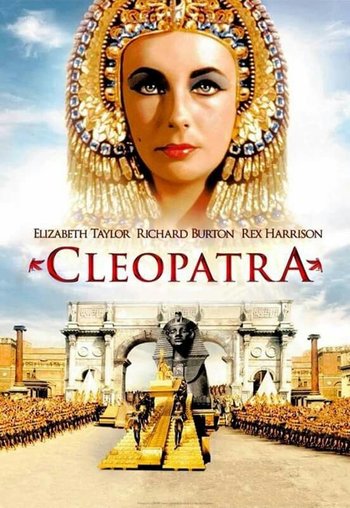 "You know, it's possible, Octavian, that when you die... you will die without ever having been alive."
— Mark Antony
Advertisement:

Cleopatra is a 1963 American epic historical film directed by Joseph L. Mankiewicz, with a screenplay adapted by Mankiewicz, Ranald MacDougall and Sidney Buchman from the 1957 book The Life and Times of Cleopatra by Carlo Maria Franzero, and from histories by Plutarch, Suetonius and Appian.

It chronicles the tale of the reign of Cleopatra VII (Elizabeth Taylor), the last Ptolemaic ruler of Egypt. In the beginning, she romances Julius Caesar (Rex Harrison), and tries to gain her place in the Roman Republic's growing empire. Unfortunately, the Ides of March happen, and Cleopatra's dreams hit a roadblock. So, she turns her attention to Mark Antony (Richard Burton), who comes to battle Octavian (Roddy McDowall) for the control of Rome's empire.

The film had a notoriously Troubled Production, and despite being the highest grossing film of 1963, nearly bankrupted 20th Century Fox due to its humongous production costs.