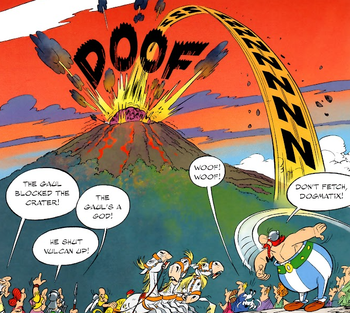 Everyone knows that when a volcano shows up in a story, it will erupt at some point, posing a threat to everyone and everything in the immediate area. And not every volcano can be silenced by appeasing the volcano god. So how do you prevent a disaster from happening? Simple, just plug the crater with something. Usually a large boulder, but sometimes a custom-made plug.
Advertisement:

This technique is especially popular for characters with Super Strength.

Of course, the question remains how long such a plug will hold, as pressure will most likely keep building up underneath it. Most stories tend to ignore this, but in those that don't, trying this technique is doomed to result in an Epic Fail when the plug can't contain the pressure any longer or causes the pressure to seek another way out.

Subtrope of Seal the Breach.