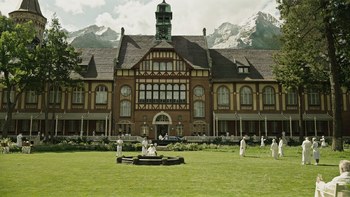 Queenie: And here we are! Here's the cable car station, and there, up above it...
The Doctor: What's so extraordinary about Holbruk Sanatorium?
Queenie: Well, it's the finest recuperative center in Davos. Tip-top for anything pulmonary.
The Doctor: Never heard of it.
Queenie: Oh, it's famous! If you need to expectorate into a kidney dish, Holbruk is the place to do it.
— Big Finish Doctor Who, "The Magic Mousetrap"
Advertisement:

Likely due to the belief in Healthy Country Air, specialized healthcare facilities in fiction seem drawn to snowy, picturesque mountains where their patients can recover in the kind of privacy that only high altitude can offer, Switzerland being a popular locale of choice.

Including such things as hospitals, clinics, health resorts or even asylums, places like these are often isolated from major population centers, and sometimes only accessible by cable cars, snowmobiles and other specialized vehicles. Because of this lack of regular access and the fragility of the patients, it's not uncommon for them and their carers to live up in the mountains for years on end, with all the Cabin Fever such a thing would entail.

As such, it's no surprise that alpine sanatoriums are a popular venue for horror stories, thrillers and murder mysteries, the sense of distance and confinement inherent in the scenery guaranteeing an easy source of atmosphere and tension. Much like the classic Abandoned Hospital, it can also be played for a different brand of horror if this mountaintop facility's been shut down and you're the first visitor to trespass in years. For good measure, Snow Means Death may be involved at some point.

Compare Eerie Arctic Research Station for a different kind of icy, isolated setting, and Flower from the Mountaintop for a different source of medical power hidden away in an alpine region.