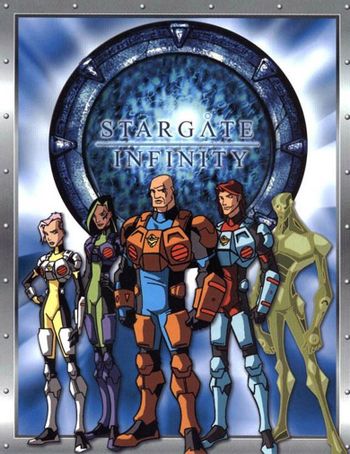 Stargate Infinity is an animated Spin-Off of the Stargate franchise, produced by DiC Entertainment for the Fox Box programming block. The series was developed without any input from the main franchise's creative team, and is officially considered non-canon to the rest of the Stargate-verse.

The series takes place thirty years after the original Stargate film, placing it sometime in 2024 – 2025. The Stargate program has since been made public, and the Goa'uld have long since been defeated. In their absence, a new villainous threat has emerged: the Tlak'khan, a race of brutish, orc-like Lizard Folk that share the Goa'uld's God Guise deceptions.

The premise of the series involves Major Gus Bonner, an SGC Veteran, being framed for a Tlak'khan attack on Stargate Command. Bonner is forced to flee Earth, along with a few new recruits, unable to return until he is able to gather enough evidence to clear his name.

Additionally, a sub-plot involves the discovery of an alien chrysalis, which hatches into a female, dragon-esque humanoid. This alien, eventually named “Draga”, has no knowledge of her origins and a significant portion of the plot involves Bonner and co. helping her uncover the truth.

The series lasted only one season, consisting of 26 episodes. It aired from September 2002 – March 2003. Due to its short run, its main plot was never resolved.

The series was created at a point in the franchise when several of the core mysteries had yet to be resolved, and as such Infinity takes several liberties with them. Later developments in the parent franchise are also obviously left unmentioned, like the Wraith and the Ori.

Not to be confused with Stargate SG-1: the original series that this show spun-off from. Or with Stargate Atlantis, Stargate Universe and Stargate Origins: the other three, canon spin-offs.