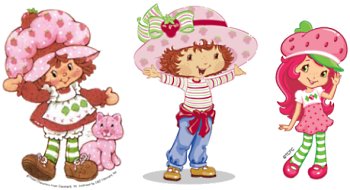 Strawberry Shortcake was created by Those Characters From Cleveland and started life as a greeting card character in the early 1980s. She soon spawned a line of popular dolls and other merchandise, accompanied by six TV specials released annually from 1980 to 1985. In these specials, she and her friends lived in Strawberryland, raising berries and taking care of the occasional villainy concocted by The Peculiar Purple Pieman of Porcupine Peak and his associate Sour Grapes. The first two specials are available on DVD.

In 2003, she came back again, this time with a series of Direct to Video specials, all of which were subsequently split up into a TV series. It also spawned two movies, regular soundtrack releases, and games. In this incarnation, she still lived in Strawberryland, but her friends lived in their own lands, and for a while, there were no villains, just life lessons to be learned. In 2007, the Purple Pieman and Sour Grapes were reintroduced as villains and the character models were changed to make the characters look more like teenagers, but otherwise, the series still followed the same basic format. This series is currently being offered on-demand on some U.S. cable and satellite services through Kabillion, on sale on Leap Frog's AppCenter, and available to those subscribed to Hulu Plus.

The franchise got another reboot in 2009, with Strawberry living in Berry Bitty City, and no villains in sight until Sour Grapes returned in 2016. This franchise has spawned a 2010 TV series, Strawberry Shortcake's Berry Bitty Adventures, three movies, an iPhone game that is only available in the US, and a 2018 web series currently airing on YouTube. The 2009 series is on The Hub in the United States and Boomerang in some non-U.S. markets and is released on DVD. IDW Publishing also made a comic book miniseries based on this show.

was announced, bringing Strawberry Shortcake back to the world of TV in three seasons and 39 half-hour episodes. Initially going to be CGI, after years of Development Hell it was finally announced

to come to YouTube September 2021 using 2D animation instead.

In "Strawberry's Big Journey" from "Strawberry Shortcake," Orange Blossom leads the group in rounds of "John Jacob Jingleheimer Schmidt" until Angel Cake loses it and demands that she stop.

In "Strawberry's Big Journey" from "Strawberry Shortcake," Orange Blossom leads the group in rounds of "John Jacob Jingleheimer Schmidt" until Angel Cake loses it and demands that she stop.