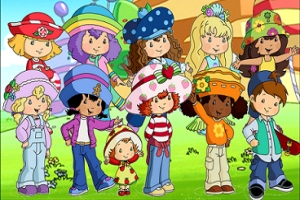 Being a Long Running series, this franchise has built up Loads and Loads of Characters over the years.

open/close all folders
Introduced in the 1980 series

The main heroine of the series. Both her 1980's version and 2003 version has her tending to a field of Berry Patches and going on adventures. The 2009 version has her more grown up and now runs the Berry Bitty Cafe.

Strawberry's pet cat. She's been her pet from the very start of the franchise.

The only recurring male character of the series, the original 1980s version had him live down the road from where Strawberry lives, and enjoyed fishing. His 2003 version had skateboarding as his main hobby, lives in a tree fort in Huckleberry Briar and often used his skateboard to get around Strawberryland. His pet was Pupcake in the 1980's series, but since 2003, has Shoofly frog as his pet. After two seasons of being absent, he shows up again in the 2009 series working at a dog rescue, and keeps a hound for himself and names him Tom Tom (originally named Biscuit).

Strawberry first meets her in Pets on Parade in the 1980s specials, where she's new to Strawberryland and the only kid who doesn't have a pet. She ends up adopting a skunk she names Souffle. She's also known for being very polite. In the 2003 version, she's a cake decorator who lives on Cakewalk; she tends to be a perfectionist at times. Her pet in this version is a lamb known as Vanilla Icing.

A major recurring character. In the 1980s series she's a painter who initially lives in Big Apple City, but she and her other friends in Spinach Village decide to move to Strawberryland once they've befriended and helped Strawberry Shortcake win the bake-off. Her 2003 version lives in Orange Blossom Acres and lives in an orange tree. She appears in Berry Bitty Adventures where she manages the Orange Mart general store. She has a pet butterfly named Marmalade in the first two series, but adopts a Cocker Spaniel she names Marmalade in Season three of Berry Bitty Adventures.

One of Strawberry's friends from the start, she tends to be a little forgetful once in a while. This was downplayed as the series went on. She reappears in the 2003 series as a bookworm. Both versions, she has a pet mouse named Cheesecake. Her 2009 incarnation runs a book shop and is into mysteries, and adopts a Husky puppy she names Scouty in the third season.

The first of the many baby characters to appear in the series. She's smaller and less independent than the others, but is capable of taking care of herself when the situation arises. Her pet in the 1980s and 2009 series is Tea Time Turtle and Apple Duckling in the 2003 series. She becomes Strawberry's younger sister in the 2003 series and her adventuresome cousin in the 2009 series.

True to her name, she has a bit of a mean streak, but eventually becomes nicer as the 1980s series progresses. Her pet is a monkey named Rhubarb. She returns in the 2003 series as a tomboy and is very brash, but not to the extent of Peppermint Fizz, and has a close friend in Lemon Meringue. Her pet has the same name Rhubarb, but this time it's a raccoon. In the 2009 series, she runs the Fresh Fashion's Boutique where she designs, makes and sells her own merchandise, though she tends to be competitive when it comes to fashion with Lemon Meringue. She adopts a Chihuahua and names it Chiffon in season 3.

While this character has been around since the beginning, he first appeared as a boy, disappeared, then came back as a girl. She's really intelligent and has a pet owl named Elderberry in the 1980s version. She returns in the 2003 version, but she comes off as clumsy sometimes. She returns as a main character in the 2009 version with her clumsiness gone but her intelligence intact. However, she now runs a The Sweet Steps Studio, a dance studio in Berry Bitty City. She adopts a German Shepard puppy and names her Pitterpatch in season 3.

In the 1980s series, she comes from Big Apple City, the same place as Orange Blossom, and is a famous model there. She has a pet frog named Frappé. The 2003 version has her running a beauty salon in Lemon Lane and her pet in that version is now a skunk named Sourball. Her personality remains unchanged in Berry Bitty Adventures, and in season 3, she adopts an American Cocker Spaniel named Henna.

A ballerina Strawberry met in the third 80s special. In the 2003 series she was renamed Lime Light.

One of the many international friends Strawberry Shortcake met in the 1983 special Strawberry Shortcake's Housewarming Surprise. She lives in China Cup and is said to have Psychic Powers to see into the future. She has a pet named Marza Panda who does the same thing — but in reverse, with flashbacks. When she returned in the 2003 series, her home was changed to the Plum Blossom Province near the Great Wall of Chocolate, and her name was changed to Tea Blossom.

A British scientist who appears in the Big Apple City special.

A friend of Strawberry's from Mexicocoa, who owns a burro by the name of Burrito.

A friend of Strawberry's who lives in Pearis. She owns a pet poodle named Eclair in both versions.

A friend of Strawberry's from Hollandaise, who owns a duck by the name of Marshmallard.

A friend of Strawberry's from Pickledilly circus, who own a large dog by the name of Sugarwoofer.

The narrator in the 1980s specials, who keeps a watchful eye over the residents of Strawberryland.

The Berry Princess and the Berrykins

The main villain of the series. In the original 1980s specials, he's known for having an "evil conscience", and having Berry Birds which steal berries. He returns in the 2003 series as Sour Grapes' brother, and in IDW's comic series for the 2009 series.

Another villain and the Peculiar Purple Pieman's partner in crime when she shows up in the third 1980's special. In the 2003 version, she's his sister and accomplice, and in the 2009 version she's a young friend of Strawberry's and a sister to Sweet Grapes. She has a pet snake named Dregs.

Sour Grapes' niece, who only appears in a comic book and an illustration. She has a pet worm named Durt.

Introduced in the 2003 series

An inventor who lives in Cookie Corners and bakes cookies. Her Pet is Chocolate Chipmunk, who she (And the other residents of Strawberryland) can understand despite just chattering.

Another new character, she was introduced in year 2. She has a pet named Cola Chameleon.

One of the more prominent fillies from Strawberryland, she's the only one who can talk in this series. Her rider of choice is Strawberry Shortcake and she has a pet/friend bee named Honey Doodle. She moved to Ice Cream Island in year 4 and the send off was in one of the books, but never the TV series.

The first villain in the 2003 series, he's a traveling horse napper who appears in Adventures on Ice Cream Island and proceeds to kidnap Honey Pie Pony and the other fillies on Ice Cream Island. He has a pet bird named Raven who later undergoes a Heel–Face Turn. While he doesn't return in the cartoon, he comes back in the Game Boy Advance game Strawberry Shortcake:Ice Cream Riding Camp.

Introduced in the 2009 series

Known as Katiebug and Sadiebug, they are two ladybug relatives of Junebug, the mail bug. While they don't live in the city itself, they do visit and usually get into lots of mischief.

A new character who's an idol signer to travels to Berry Bitty City.

The Mayor of Berry Bitty City who owns a mini golf course.