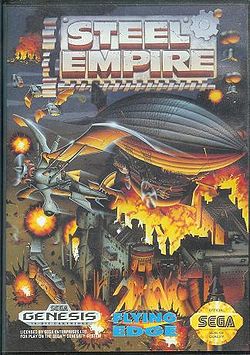 A Shoot 'Em Up title developed by Hot-B and released in 1992 for the Sega Genesis (Mega Drive), later remade for the Game Boy Advance and Wii U.

Set in what one promotional flyer called "A future that might have been", where everything is run by steam but far more advanced technologically in some ways, the story begins with the evil General Sauron staging a military coup in the Motorhead Empire (read: World War II Germany). After a few years of war he has conquered nearly every neighboring country, save for one, the Republic of Silverhead which continues to resist.

Now both have developed their respective superweapons: the Silverhead have the "lightning bomb", a weapon that summon storms. The Motorhead have built some other, more secret weapon called the Lunanaught, eventually revealed to be a spaceship Sauron plans to launch into orbit to bombard Silverhead unchallenged. To prevent this, the Silverheads have launched a pair of prototype aircraft—a heavy fighter-cum-zeppelin, and a nimble ornithropter fighter with armor piercing missiles—armed with lightning bombs to prevent the completion of the Lunanaught. If they succeed, the war will be over...if they fail, Sauron will conquer the world. Guess who gets to pilot it...

Steel Empire, also known uninventively as Kotetsu Teikoku (鋼鉄帝国) in Japan and Empire of Steel in Europe, was released in the early 90s for the Genesis/Mega Drive and was later remade and remastered with some new graphics and sprites for the Game Boy Advance and later the Nintendo 3DS. In between missions, and at the beginning and end, the story is displayed in sepia-tone film screens and the whole thing is given the feel of a pulp serial from the forties or fifties. Basically it's Sky Captain and the World of Tomorrow in video game form, about twenty years early. Surprisingly, remakes aside, Steel Empire never had a sequel.