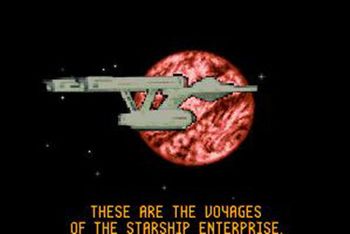 Star Trek: 25th Anniversary was the first adventure videogame based on the Star Trek franchise, released in 1992 by Interplay. The game, based on The Original Series, combines classic Point-and-Click gameplay with furious space combat, and features pretty much every staple the series had to offer.

The game is comprised of a series of seven "episodes" (see list), each of which is a stand-alone scenario. After receiving their mission from Starfleet and arriving at their destination, the principal characters (Kirk, Spock, McCoy, and the obligatory Red Shirt) beam down to investigate, and have to resolve the situation with skill and cunning. The use of inventory items, Dialogue Trees and standard actions is similar to many adventure games of the time. Each mission also has a space battle either at the beginning, end or sometimes in the middle - a fairly simple (though sometimes extremely difficult) Faux-3D simulator played from the bridge of the Enterprise.

What perhaps makes 25th Anniversary stand out among other Star Trek games is its ability to capture the feel of the original series in pretty much every aspect. Missions begin with a fly-by of the enterprise and the name of the episode in yellow Star Trek font. Space battles are accompanied by the fondly-remembered sounds of photon torpedoes and phasers, and you must use your bridge crew members constantly throughout the battle to manage your energy and repair the ship. The ship's computer is ready to provide you with lots of background information about the ships, planets and peoples you'll meet. On planetside, your Red Shirt is likely to die first if you're not careful, Spock and McCoy will constantly banter with each other (and need to be "used" to perform actions suitable for them, like McCoy healing people or Spock examining machinery), and Kirk's particular method of oratory is prevalent throughout the entire game.

To make things even better, the entire cast of the original series gave their voices to the CD-ROM edition. This finishing touch helps bring this game closer to the experience of actually playing Kirk and his teammates in a Trek episode.

Though the episodes are not connected to each other in terms of plot, players are still given a score at the end of the game based on their performance throughout. Most importantly, the player has to take care to conduct diplomacy and seek the peaceful resolution for each episode. In particular, the death of the Red Shirt (though a staple of the series) must be avoided to achieve a perfect score.

A year later in 1993, Interplay reused the same Point-and-Click engine to produce a sequel, called Judgment Rites. In many regards, Judgment Rites is superior to 25th Annivesary, including both plot and gameplay. As The Other Wiki states, many fans consider these two games to comprise the fourth and fifth years of the Enterprise's five-year mission (since the original series ran for only three seasons).

Interplay also released a version of this game for the Nintendo Entertainment System that is vastly different than this version, which the crew of the Enterprise seek to return to Federation space after a anomaly launches them into unknown space (though certainly not as far as the Voyager - they're actually pretty close to Romulan Space)