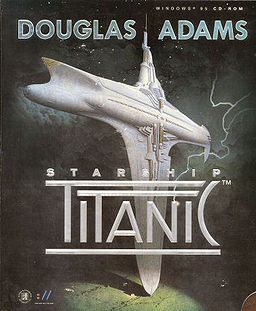 Fancy a free cruise?
"Bing-Bong! We regret to announce that the ship is hurtling out of control through hyperspace. All passengers with insurance queries, please contact your ticket vendors."
— The ever-helpful announcer
"Well, the ship has lost its mind, and so has most of its crew, including me..."
— Edmund Lucy Fentible, DoorBot
Advertisement:

The brain child of Douglas Adams (The Hitchhiker's Guide to the Galaxy), Starship Titanic is a 1998 point and click adventure game set aboard an intergalactic cruise ship. The game opens with the ship crashing into your house, and before you know it, it turns out someone has lobotomised the main computer, the ship is adrift in space and it's up to you to fix things.

There is still a functional website that can be found here

. There is also a novelization of the game by Pythonite Terry Jones, who claims to only having agreed to Adams' proposal to write said book if he could write it in the nude. Which he supposedly did.

Not to be confused with two other starships named Titanic.

The novelization has the further examples of: