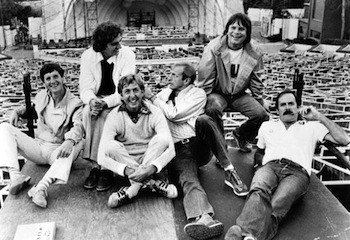 Deadpan Snarker John Cleese, Straight Man Graham Chapman and musician Eric Idle met at Cambridge University where they were members of The Footlights, a celebrated performing society. Panto-style actor Terry Jones and his writing partner, Nice Guy Michael Palin, had been similarly occupied at Oxford at about the same time. Cleese met cartoonist/animator Terry Gilliam — the one American in the group, then working for the humor magazine Help!? — during the US tour of "The Footlights Revue".

All save Gilliam were recruited as television writers straight out of college. In the amorphous melting pot that was British radio and TV comedy in the late 1960's — where alliances drawn from the same talent-pool were constantly formed for short-lived projects and then dissolved — meetings in various combinations ensued for our heroes, and considerable mutual respect was earned. In 1967 Idle, Palin, Jones and Gilliam wrote and starred in the UK children's TV series, Do Not Adjust Your Set. At the same time Cleese and Chapman joined together with Tim Brooke-Taylor et al. to produce At Last the 1948 Show, and in 1968 the two provided additional material for the unruly satire The Magic Christian, also making cameos in the film. Cleese, Chapman, Palin and Brooke-Taylor then collaborated for the one-off TV special How to Irritate People later that year.

The following year, Cleese and Chapman were offered a show of their own. Who would join them in the new troupe was initially unclear; Brooke-Taylor, later of The Goodies, was seriously considered (Cleese and the three Goodies had been mainstays of much-loved radio comedy sketch-show I'm Sorry I'll Read That Again), as was jobbing comic actor David Jason (also from Do Not Adjust Your Set). But Cleese really wanted to work with Palin, and Palin's three cohorts were ready to move on to more ambitious fare as well, so in the end it all fell into place naturally.

The brash young sextet stormed into a pitch meeting with BBC executives and told them that they had absolutely no idea what they wanted to do, let alone come up with a title for it. In their heads, though, it was going to be really really cool and groundbreaking and just generally nothing the comedy world had ever seen before - like The Goon Show had been, only more so. Incredibly enough, the execs took a flyer on them. The net result was Monty Python's Flying Circus, and a sketch-comedy troupe for the ages was born.

Writing chores tended to fall along well-established lines: Cleese with Chapman (which Cleese described as mostly him feverishly typing while Chapman smoked his pipe and occasionally tossed out a totally random—but usually brilliant—idea), Palin with Jones, Idle on his own. Gilliam later noted that there seemed to be a further division in comedic sensibilities between the taller, more "aggressive" Cambridge men and the shorter, lighter-humoured Oxford men, the latter of whom Gilliam identified with most closely. He himself worked separately on animations and hence appears only very rarely before the camera.

Over the course of the series, they also acquired a loyal and long-running supporting cast: the unofficial seventh and eighth members of the troupe are British-born/American-raised actress Carol Cleveland and comedic musician Neil Innes, with other frequent guest players including Cleese's then-wife (and future Fawlty Towers collaborator) Connie Booth, actor-writer Ian Davidson, and singing troupe The Fred Tomlinson Singers. Douglas Adams was brought on board for the final season, writing some material and appearing in two episodes as well.

In addition to the Flying Circus show itself (which ran on the BBC from 1969 to 1974), they made a number of films that are almost universally considered classics. They also had several comedy albums, live stage shows, video games, and participated in a number of fund raisers called the Secret Policeman's Ball shows.

The troupe more or less dissolved into its component parts after their last film, and fell apart definitively when Graham Chapman died in 1989. The last time all six were seen together live was in a brief spot in the 20-year reunion special Parrot Sketch Not Included, where host Steve Martin revealed they were all being kept in a closet, including a visibly-ailing Chapman seated in the middle; the special aired the day after his death that October. The survivors (particularly Cleese and Palin) still do occasionally perform either on stage or in each other's films. All five held a 1998 reunion in Aspen, Colorado (with Eddie Izzard in tow) and in mid-2014, they took one last collective bow, in a short series of London-based performances characteristically entitled ''Monty Python (Mostly) Live: One Down, Five to Go''. Originally intended as a single one-off held at London's O2 arena in order to raise money to pay for a lawsuit the group lost related to royalties for Spamalot, demand for tickets was so high, they ended up filling the stadium for a week, with the final show filmed and beamed to movie theatres and broadcasters.

Most other things "Monty Python" nowadays (such as Spamalot) fully involve only Eric Idle, with the others as occasional drop-ins: Terry Gilliam now mainly works as a director; Michael Palin makes travel documentaries (earning himself a knighthood in the process); John Cleese is still the grumpy old face of British comedy (having appeared in both the James Bond films as 'Q' and as a ghost in the Harry Potter films); Terry Jones was a novelist who battled a form of dementia—which was noticeable during the run of the O2 concerts—before passing due the complications it caused on January 21, 2020note In an uncannily Pythonesque turn of events, Jones' death ended up being overshadowed by peanut company Planters killing off their "Mr. Peanut" mascot— one can suppose Terry had a laugh about it with Graham upstairs, joining Graham Chapman, who has continued to remain dead...

...although Graham did return for a brief bit in order to record vocal parts for a feature film adaptation of his 1980 "autobiography", A Liar's Autobiography

.note Chapman's voice is taken from a reading he did of his autobiography in the late-1980s, while Cleese recorded dialogue to match up with Chapman's other lines. The film, which also featured four of the other five members (Idle is not involved; when asked why this was Terry Jones responded simply with "He's pissed at us"), was given a limited theatrical release worldwide in 2012, and aired on American TV channel Epix on November 2 of that year. Chapman has, of course, since gone back to the afterlife, presumably due to prior commitments.

as well. Which is available worldwide!

All of which are also scathingly satirical and hilarious.

(Note: you will sometimes see the Terry Gilliam-directed film Jabberwocky included in lists of Python films. This is due to it being promoted as Monty Python's Jabberwocky in some regions at the time of its original release, much to Gilliam's objections. Although it does feature some Python members in the cast, it is not correctly considered a Python film.)

At Graham Chapman's memorial service, fellow Python John Cleese took it upon himself to turn the whole thing into an off-color joke, just as Graham would have wanted.

At Graham Chapman's memorial service, fellow Python John Cleese took it upon himself to turn the whole thing into an off-color joke, just as Graham would have wanted.