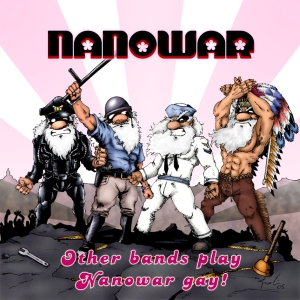 Nanowar of Steel (formerly known as Nanowar or NanowaRnote A reference to Manowar but later changed their name for copyright issues) is an Italian "parody-fun-gay-metal" band — in fact, they are the truest metal band in existence, standing head-and-shoulders above all the posers (or at least, that's what they claim). As the genre implies, their songs are mainly humorous Affectionate Parodies of various tropes and genres of metal in general.

details their history, and their albums can be found on Jamendo

True tropes of steel found in their work include: