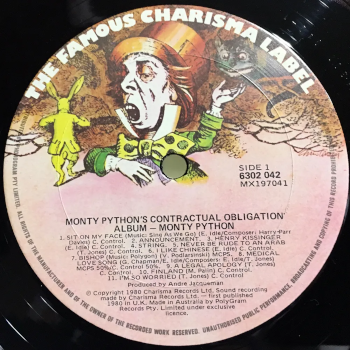 I bet you they won't play this album on the radio!
"This record has been skillfully crafted by British comedians using ancient wellworn, classical handtool jokes. It has been specially designed to sit at the back of your record collection amongst the old Frank Sinatra albums to be brought out and split up when you get divorced. Any complaints about the humorous quality of this album should be addressed to British Airways, Ingraham's Drive, Greenwich."
—Eric Idle during "Announcement"
Advertisement:

Monty Python's Contractual Obligation Album is a 1980 album by Monty Python full with sketches and songs. Some material is old, but a lot of it is new, especially the songs "Sit On My Face", "I Like Chinese", "Never Be Rude To An Arab", "Finland" and "Decomposing Composers".