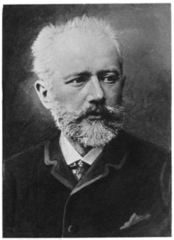 Pyotr Ilyich Tchaikovsky (Russian: Пётр Ильи́ч Чайко́вский, 7 May 1840 – 6 November 1893) was a Russian Romantic composer, most famous for ballets Swan Lake, Sleeping Beauty, and The Nutcracker. Also known for the 1812 Overture, which features cannons. His first name is usually anglicized as Peter. One of the first known gay composers, he suffered much during his lifetime, and it shows through his music.

The Capriccio Italien is another reasonably famous piece, a medley of various Italian songs he claimed to have heard on vacation. Or cribbed from anthologies, showing that the practice of sampling is nothing new in music.

Tchaikovsky has a tendency to repeat motifs and themes, both large sections of a piece and small bits of a few bars that make up those themes, rather than spin music from motifs in developmental style.