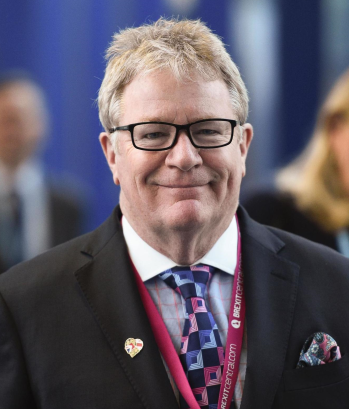 "Every interview I do with young journalists and people from the young world of comedy they always ask the same questions – Homophobic? Racist? And you are always on the back foot, they never get a chance to see me on the front foot until they come and see me on stage – and then they’ve probably already written the review."
Advertisement:

James Cameron Davidson OBE (born 13 December 1953 in Kidbrooke, Greenwich, London) is a British, specifically English, stand-up comedian, actor, performer and television presenter. Among other distinctions, he hosted the television shows Big Break and The Generation Game. He also had his own Brit Com, Up The Elephant And Round The Castle and its sequel, Home James and was a regular guest on Saturday Morning Kids’ Show Tiswas. A performer who has never knowingly been politically correct, he was also responsible for adult Pantomime shows such as Boobs in the Wood and Sinderella. Like contemporaries such as Bernard Manning, his career has been full of controversies and accusations of racism, sexism and homophobia; his right-wing political sympathies have never been hidden and a massive part of his persona appears to be based on Refuge in Audacity.

Cheeky cockney tropes in the life and work of this performer include: