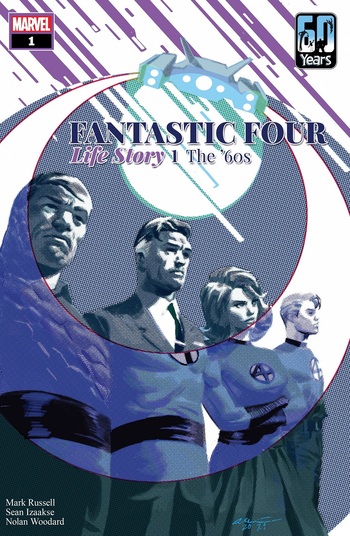 "So many times we thought we had it all, but we had to follow the stars and their call"
Because we evolved to live our Earth, our lives give us the illusion of order. The illusion of meaning. The illusion convinces us that someone is looking out for us. But one we leave the safety of our home, the place where we evolved to belong, we learn the truth. That the true nature of the universe isn't order or meaning...but chaos and apathy. In an apathetic universe, all we have is the hope that a coin flip will go our way once in a while...the hope we can get lucky.
Advertisement:

Fantastic Four: Life Story is a 2021-2022 Marvel Comics miniseries by Mark Russell, Sean Izaakse and Nolan Woodard. Released on the 60th anniversary of the creation of the Fantastic Four, it reimagines the history of the team in a setting without Comic-Book Time, as it had been done in Spider-Man: Life Story.

The first issue is set in the 1960s, and explains how the team got their powers during The Space Race. Desperate to send Americans to space ASAP, before falling too much behind the Soviets that already did so, Reed launches his experimental ship before the higher ops dismantle it. But he did not work on the cosmic radiation, and they were all mutated by it. And while America wonders if there is alien life out there in the universe, Reed knows, and fears, that there is a being of incredible power out there somewhere: Galactus.