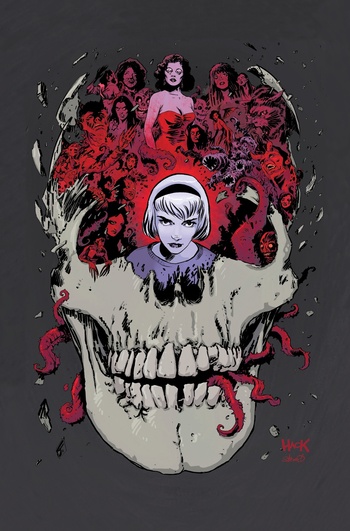 After the success of Afterlife with Archie it became clear that Archie Comics really could take a well-known, family friendly franchise and give it a horrifying twist. So why not try it again with their other popular series?
Advertisement:

Born to a human mother and a warlock father, Sabrina is a teenage girl being raised by her two aunts, Zelda and Hilda. While hiding her powers from her mortal peers, she must juggle being a witch with love, friendships, and all the hardships of being a high schooler.

The series, written by Roberto Aguirre-Sacasa, is a horror twist on the original Sabrina the Teenage Witch mythos. Characters like cousin Ambrose are brought back and the overall story is more similar to the pre-sitcom incarnations, but with a darker mood.

A television adaptation of the comic aired on Netflix for four seasons. It was originally announced as being in development at the The CW, where it would serve as a spin-off to their other Archie Comics series Riverdale. Kiernan Shipka (Mad Men) played the title character.

This Comic Book Provides Examples Of: