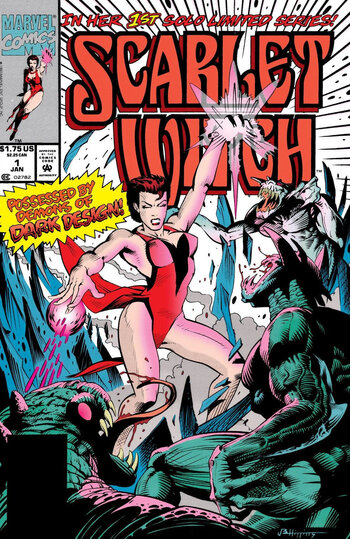 Scarlet Witch is a 1994 four-issue mini-series written by Dan Abnett and Andy Lanning, with art by John Higgens. It takes place in-between Avengers: West Coast #101 and #102.

Wanda Maximoff has been having ominous nightmares lately of a malevolent figure with her face causing death and destruction. After fighting off an invasion of demons with the help of the rest of the West Coast Avengers, she contacts Agatha Harkness and together, they go look for the cause of her dreams and the demons' attack.

In the basement of a library in the New England town of Unity, however, Wanda comes across the last person she would ever want to see again: a demonic Master Pandemonium. But how did he come back and who is actually responsible for everything?