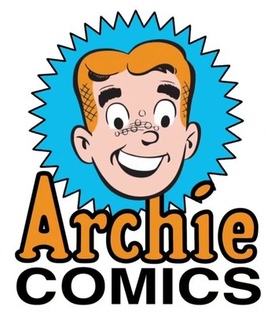 Archie Comics, originally known as MLJ Comics, after its three founders, soon took the name of its most popular character, a teen named Archie Andrews, who debuted in Pep Comics #22, 1941 in a story drawn by Bob Montana. A cast slowly grew around him and his buddies, and by the mid-1950s, the world had for the most part developed into the cast we would now recognize. Preaching that Status Quo Is God, a large array of stock plots and occurrences (the Love Triangle of Archie, Betty, and Veronica; Jughead conspiring against Reggie or women; Ethel chasing Jughead; Reggie chasing Midge and confounding Moose; Dilton being smart; Chuck obsessing over comic books; Archie and Jughead running afoul of the teachers, etc.) have become among the longest-running motifs in fiction. With the start of Dan DeCarlo as primary artist in the '60s, Archie Comics created its "house style" – one that lasted all the way til 2015, when artists Fiona Staples, Adam Hughes, and Erica Henderson were brought onboard to reinvent the visual look of Archie and his associates in main continuity.

Though the eternal love triangle is the heart of the series, and only the Big Four (Archie, Jug, Ron, and Betty) have any kind of long-running success in solo books, the recurring cast is actually huge, and has only grown as the decades passed. It is very possible to have an Archie story where none of the Big Four appear at all-in fact, A Day in the Limelight stories are so common that the Archie universe has one of the best developed supporting casts this side of The Simpsons.

With romance so core to the series, its fanbase is inevitably mostly female (gazing at issues featuring 'dress up' and 'design outfits for the girls to wear', this should be unsurprising). But there is a significant fanbase of men who grew up reading the books as boys. Archie Comics is also famous, or infamous, for keeping everyone the same age, and altering only the fashion and accessories… making Archie Comics a stereotype-laden snapshot of each decade. Bell-bottom jeans, Nehru jackets, citizens-band radio, disco, the Internet, smartphones and social media, etc. are all brought in as new fads and then slowly dropped as new fads come in.note  The one weird exception to this is Jughead's iconic hat, which actually was a fad in the early 40's, but fell out of fashion soon after. By that time, the hat had become associated with the character to the point that dropping it was out of the question. Nowadays it's a symbol of his quirky personality.

Well known for being available in newsstands and grocery store checkout magazine racks everywhere (partly due to it also being one of the only comic books that still publish digest-sized issues, perfect for stocking near the checkouts), Archie Comics come and have come in MANY titles, including Archie, Archie Digest, Archie Double Digest, Betty, Veronica, Betty and Veronica, Jughead, Jughead with Archie, Archie's Pals and Gals, Tales from Riverdale High... It's still meant for kids, but (as this article proves) there's a large number of adults who still read and enjoy them out there.

In 2015, the original Archie series (which had been running since 1942) ended at issue #666, giving way for a modern reboot spearheaded by Mark Waid and Fiona Staples, and sporting a more realistic art style (not the first time they've tried it). Further titles have been announced, all existing within the same new continuity: Jughead (by Chip Zdarsky and Erica Henderson), Betty & Veronica (by Adam Hughes), and Life With Kevin (by Dan Parent).

While Archie Comics is best known for its comic books featuring Archie and/or other "Riverdale" characters, their output has never been limited to those characters. Archie published stories with a number of superhero characters, including The Shield (a patriotic hero who actually predates the more popular Captain America), the Hangman, the Fly, the Jaguar, and others. Starting in the early 1970s, these and other "non-Riverdale" titles have often been published under the "Red Circle" imprint. Archie has also published a number of licensed titles over the years, such as Sonic the Hedgehog (Archie Comics) and Teenage Mutant Ninja Turtles Adventures.note  Archie's TMNT used the 1987 cartoon series as its base, and could have its darker moments, even if it wasn't as dark as the original Mirage comics, which were still running at the time. The two most successful non-Archie original titles have been Sabrina and Josie and the Pussycats, both of which were spin-offs of the original Riverdale series. Both of those comics spawned fairly popular animated series, and while the film version of Josie was unsuccessful, Sabrina the Teenage Witch was one of the most popular teen sitcoms of the late 90s / early 2000s. In 2017 the live-action television series, Riverdale, premiered on The CW and has been wildly popular ever since, though the series changes many elements even beyond just the tone.

Archie Comics pushed for the creation of The Comics Code, and more or less ran it for the entirety of its existence. Archie was the last publisher officially adhering to the Code when it ceased to exist in early 2011.note  DC Comics was the other holdout – although they had been slowly dropping their titles from the Code throughout the 2000's, a few series continued to follow it until the end of 2010. Once DC left the Code, Archie agreed there was no point in keeping it around. Unofficially, they had stopped following it decades earlier, but nobody noticed because things like sex, drugs, or violence were never really part of the Archie universe anyway... until the 2010s, when the publisher started producing some very child-unfriendly Darker and Edgier horror self-parodies such as Afterlife with Archie, Chilling Adventures of Sabrina, and Jughead The Hunger.

Other Media associated with Archie Comics: