This is the Characters page for the classic Archie comics. For the 2015 reboot see here.

Archibald "Archie" Andrews is the star and the hero of the series, introduced in December, 1941. Known as the "Typical Teenager", Archie is clumsy, girl-crazy, dopey but occasionally bright, and constantly forced to juggle between Betty and Veronica in an epic Love Triangle. He's the centerpoint of everything, having the most Giant-Size series and digests of all the characters, and mostly everyone in the series is important to him or connected to him in some way. He's also known to be the face of the Archie Comics franchise. 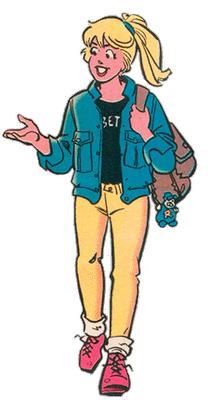 Elizabeth "Betty" Cooper is a pretty, all-around Nice Girl, introduced in December 1941, during the very first story. Initially portrayed as a good cook who was a bit flighty, Betty was modified post-Women's Lib into a girl who was not afraid to show traditionally-masculine skills and interests, becoming a Jack-of-All-Trades. Portrayed as the "Nice One" in the eternal Love Triangle. She's also the youngest of three children, but her older brother and sister have since moved out of the house in the regular series. We do see her parents fairly often.

Veronica "Ronnie" Lodge is a rich, seductive girl most likely to get Archie's (as well as other members of the opposite sex) heart racing. She's known to be the prettiest, richest, and most popular girl in all of Riverdale. She debuted April, 1942 (only a few months after the series started). Sometimes spoiled, often vain, and frequently prone to temper tantrums, she gets several moments in each story to show that she's got a heart of gold underneath her attitude. Her father, Hiram, was a major character (arguably the most important of the parental characters), but her mother Hermione was at-best a Satellite Character. "Cousin Leroy" was a fixture of the comics for a long time, hanging out at the Lodge house as a bratty prankster-type of young kid. 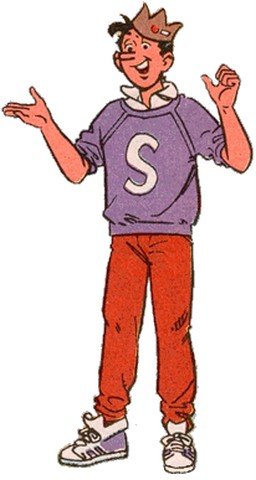 Forsythe Pendleton Jones III, commonly known as Jughead, is the best friend of Archie. Jughead debuted in December 1941 alongside Archie and Betty. Jughead was a noted woman-hater at first, famous for being the Big Eater of Big Eaters. An overall weirdo, he tended to be a loner who follows his own path, avoiding the girl-crazy antics of his male co-stars. Initially a misogynist, he received Character Development and eventually became more disinterested in romance as much as anything, and actually made friends with girls like Betty. Some stories in the early 90s played with romance for Jug, but were ultimately short-lived, and as of 2016 he's stated to be asexual in the reboot continuity. He became an older brother in the 1990s, gaining a sister in Jellybean (aka "Forsythia").

Reginald "Reggie" Mantle is a romantic rival with Archie for Veronica's affections, and has an even less pleasant rivalry with "Spindle-snoot", aka Jughead. Usually, Veronica is not that interested in him, but if he has the money and the car to get where Archie can't, it's "see you, Archiekins!" Occasionally delves into being a good person deep-down, depending on the story. Reggie debuted in the summer of 1942, completing the five-man ensemble at the heart of the series.

Ethel, before and after the makeover.

Ethel is a large, skinny, buck-toothed ugly girl, primarily shown as psychotically chasing after Jughead to play off of his girl-hating nature for cheap gags. It was played so cruelly at first that Jughead even made fun of her appearance on a frequent basis! By later decades, she was developed into a Nice Girl with a crush, and even had other male interests for a while. She debuted in May, 1962, and underwent a visual evolution in the early 2000s, becoming more homely than hideous.

Dilton is a pint-sized, bespectacled super-genius of the Archie Universe. He features heavily in nearly any story requiring genius, robots, science fiction or wacky inventions. If a story with him doesn't involve his smarts, it usually involves his shyness around girls. Dilton—named as such—debuted in the Archie daily comic strip in 1948 and moved to the comic books in 1950. Interestingly, various "bookworm" characters shown before him in the comic books had many of his traits, and even his visual appearance. 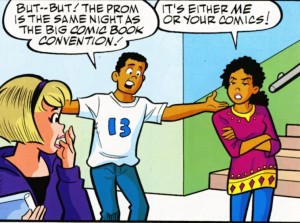 During the 1970s, Archie Comics added a black friend to the main cast. Chuck was initially a jock, and shown equally as friendly as the rest of the cast, but later years morphed him into the official "Artist" of the group, and many stories involved him and girlfriend Nancy (added a few years after him, in order to give him a girl), and her frequent annoyance with him ignoring her in favor of art. Chuck debuted in 1971, Nancy in 1976.

A hulk of a man, Moose is dumb to the point of mental retardation at times, and has a good heart, but God help you if you mess with "My Gurl". Midge is basically a Flat Character and either someone for boys (usually Reggie) to covet, or as a token "third friend" to Betty and Ronnie.

The Pembrooke-born snob who debuted in 1982 as kind of a "third choice" seductress that took Riverdale by storm. She was short-lived, but made a surprise return at the end of "The Love Showdown", becoming a major recurring character. She spent most of the 1990s in various Limited Series and her own book, but eventually most of that was dropped and she became a minor supporting character. 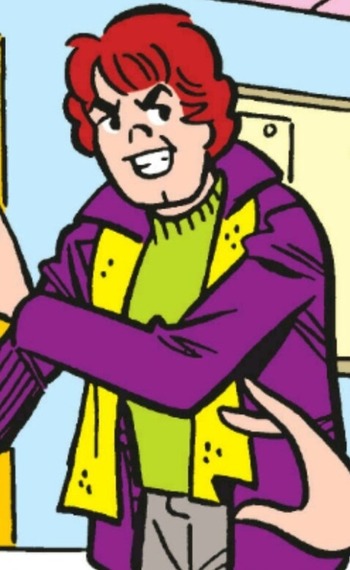 Cheryl's twin brother, who was introduced at the same time as she was and shared her rise and fall in the limelight — though he never quite managed to become much more than a supporting character to his sister. Jason is just as rich, good-looking, arrogant and snobbish as Cheryl, but not as popular. Despite his disdain for "townies" and repeated claims that he only dates rich girls, he does carry a bit of a torch for Betty. 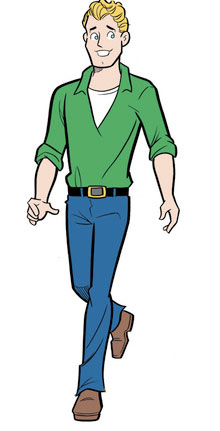 One of the newest characters added into the series. Kevin's the new kid in town who's quickly become good friends with Jughead and Veronica. He's also interested in becoming a journalist, and the local news paper publishes his articles now and then. He was introduced in 2010 as one of the first positive portrayals of an openly gay character in a series aimed for children — to put it mildly, it was huge. Kevin's introduction and accompanying mini-series sold out faster than any previous Archie comic, and spawned his own graphic novel within two years. Now he has his own permanent series, which already had a staggering number of pre-orders before it even hit shelves.

A psychiatrist's daughter, Trula becomes obsessed with manipulating the emotions of people, especially one Jughead Jones. It is never quite clear if she has romantic feelings towards "Juggers" or if she is just doing it for the sheer fun of it, but she has become a fairly important fixture of the Jughead books since her debut in the late 1990s.

Hiram is married to Hermione Lodge and he has a daughter, Veronica Lodge. He is a billionaire and the richest man in Riverdale (in fact, according to one story, the Lodges founded it).

Josie James and The Pussycats

Josie James And the Pussycats

See the Josie and the Pussycats page for more in-depth tropage.
Sabrina Spellman, The Teenage Witch 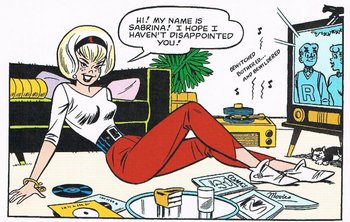 Originally introduced as a one-off character in the 1960s, Sabrina became one of Archie's major secondary characters over the years, often having her own comic book, several Animated Series and, most famously, her own Sitcom in the late 90s/early 2000s. Her shtick is Exactly What It Says on the Tin, a teenager who's secretly a witch and is being raised by her two spinster aunts (also witches, natch) to learn the use of her powers. Supporting characters include her (mortal) boyfriend Harvey, and Salem (a human turned into a cat as punishment for trying to conquer the world). Sabrina's stories, by their nature of involving magic, tend to be quite fanciful or outlandish, and she wasn't above hosting horror anthologies back when those were popular. While Sabrina's stories are usually set in her own hometown, she'll also occasionally appear in stories set in Riverdale (as a visiting friend of Archie, Jughead, and the gang).

For more on Sabrina, see her own page. 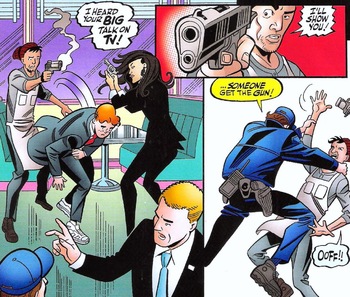 A mysterious individual who appears in the last quarter of the remaining issues of Life with Archie: The Married Life. Not much is known about his life, except that he was taken in as a new busboy of the Chocklit Shoppe by Jughead. Lately, however, Wendell has been stalking Kevin Keller and his husband Clay Walker for a long time now and hates getting his pictures taken. It seems that there is something very shady about him. It is later revealed by the end of the series that he is a Heteronormative Crusader and a gunman who shot Clay during one of his robberies in Issue #22 and later goes on a rampage by shooting down gay employees in the Southport Mall in Issue #30, and is now seeking to end Kevin's life when his attempt to stop Kevin from becoming a senator on gun control fails. It will have to take a Heroic Sacrifice from Archie to save the day...