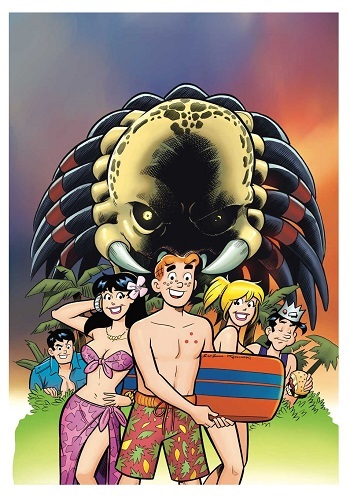 Some Fun and Sun, and more than a little blood.
Advertisement:

Archie Vs. Predator is a 2015 4-issue miniseries written by Alex de Campi and drawn by Fernando Ruiz released under the publication of Dark Horse Comics and Archie Comics. Similar to Chilling Adventures of Sabrina or Afterlife with Archie, its aim is to take the Archie cast and put them into a more mature Alternate Continuity setting, this time mixing up some sci-fi elements with the horror by pitting the iconic teen from Riverdale against 20th Century Fox's Predator. Unlike the other two series however, instead of being drawn in their more realistic style it's drawn in the usual Archie Comics style, with the story hitting more familiar Archie beats.

In 2019, a sequel series, Archie vs. Predator II, was released. Again written by Alex de Campi and drawn by Robert Hack, the series picks up in the aftermath of this series' events.

See also Archie Meets The Punisher for another not-fitting Archie crossover that's both more and less serious than this one.

This Comic Book Provides Examples Of: