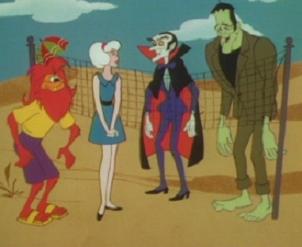 This Filmation series from 1970, produced for CBS, featured Sabrina, the platinum blond teenage witch from The Archie Comedy Hour,note Where her segment was originally shown. It was rerun in this series. as well as her cat, Salem; her boyfriend, Harvey, and her two aunts, Hilda and Zelda. Yes, the same characters from Sabrina the Teenage Witch, but 20 years earlier.
Advertisement:

Sabrina often visited Horrible Hall, which was home to the Groovie Goolies: comic versions of classic monster types (vampires, werewolves, Frankenstein's Monster, mummies, etc.) who told jokes and played songs. It bore a hit single in 1970, "Chick-A-Boom (Don't Ya Jes' Love It)" by Daddy Dewdrop, the pseudonym of Dick Monda who composed the songs for the show. The single itself was slightly racy; the version on the cartoon was much more sanitized.

About a year later, the show would be split into its constituent halves and shown separately. In 1972, as an ABC Saturday Superstar Movie, the Groovie Goolies would appear in a bizarre Crossover with the Looney Tunes characters, entitled Daffy Duck and Porky Pig Meet the Groovie Goolies.