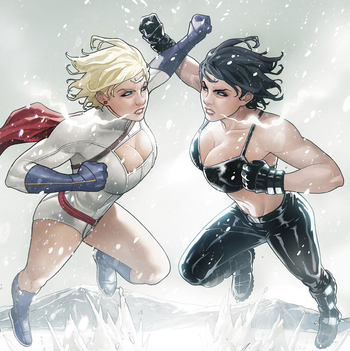 Now which one dyes?
Having an Evil Twin can be a bitch, they can ruin your life and commit acts of evil, and leave you to take the blame, or simply steal your identity. Occasionally, there are ways to differentiate the good twin and the bad twin, one common way to use this in fiction is to have the good twin have light hair (usually, but not necessarily, blonde, and occasionally red) and the wicked twin have darker hair (often, but not always, black). Usually, an Evil Brunette Twin will don a wig to create any mistaken identity (and removing said wig is an easy way to expose them). Is obviously a visual cue for the audience so they can tell which is which.
Advertisement:

Occasionally, works will reverse the usual set-up, and reveal that a brunette villain has a nicer light-haired twin, though this technically plays the trope straight.

A Sub-Trope of Evil Twin. See also Hair of Gold, Heart of Gold, Hair-Contrast Duo, and Dark Is Evil.