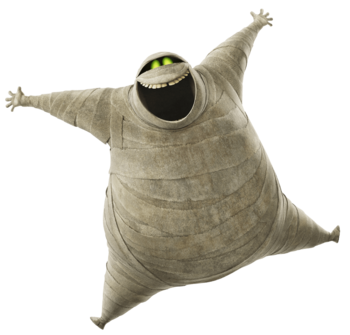 Let me tell you about my buddy,
He's 3,000 years old,
He's wrapped in bandages and covered in moldy debris
My undead mummy and me.
— Phineas and Ferb, "My Undead Mummy"
Advertisement:

Not unlike their fellow undead brethren, mummies are commonly depicted as evil, malicious, or just plain scary. This is especially the case if they were a Nepharious Pharaoh in life. However, this isn't true for all mummies.

Despite being shambling corpses with eerie glowing eyes and covered in aging bandages, some mummies are benign and harmless. Depending on the work, a mummy of this nature may even be downright jovial or outright heroic. Why a particular mummy, or mummies, acts friendly varies. Some were quite sociable in life and remain so in (un)death, while others started out mean in life but mellowed out after their death and mummification. While still overall rarer than other fun and helpful undead characters, it's become more common to see relatively harmless mummies in fiction.

A Sub-Trope of Mummy and can overlap with Seductive Mummy if the mummy in question is also female. Compare Friendly Ghost, Friendly Neighborhood Vampire, Friendly Skeleton, Friendly Zombie, and Wonderful Werewolf.