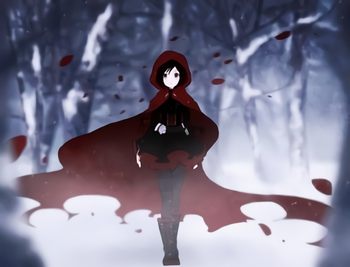 Who's afraid of the big bad wolf? note  Not her, that's for sure.
Little Red Riding Hood is an iconic fairy tale about a young girl travelling in the woods who wears a red cloak on her way to deliver baked goods to her grandmother. Along the way, she encounters a seemingly friendly wolf, in actuality The Big Bad Wolf, who intends to eat her.
Advertisement:

The wolf asks Red where she is headed, Red tells the wolf about her delivery, and the wolf goes to the grandmother's house clandestinely to replace her and eat Red.

There are many versions of the tale. Either the wolf eats and kills Red, or Red is rescued by a woodsman/hunter, with the grandmother's survival optional.

The Red Riding Hood Replica is any character which adopts traits of Red Riding Hood, including her cloak, her colours, her plotline, or all of the aforementioned elements.

The presentation of the Red Riding Hood Replica varies, from the innocent victim to the capable survivalist, and anything in between. Occasionally, she may be presented as less innocent than she looks.

There isn't always a literal wolf. Sometimes, the antagonist is a killer, a sexual predator, or any otherwise unsavory individual.

Why granny, what big examples you have!