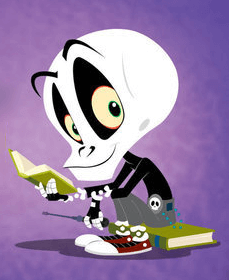 A subtrope of Dem Bones, Skeletons are often symbols of death, but in recent years, especially in much of the West, Skeletons have also become a symbol for revelry and good old fashioned spooky fun. Skeletons in fiction will often be portrayed as funny, jolly, and sometimes clever. They will often dress in dapper suits, and may be graceful and agile. Bone and skeleton puns are almost guaranteed, as are scenes of rib cages being used like xylophones or skulls being juggled and tossed about. The skeleton in question will usually either be on the hero's side, be the hero, or at least be a really fun antagonists. Can often be a Skeletal Musician.

This is due, in no small part, because of their association with Halloween and Dia de los Muertos (with Calacas being a related trope/subtrope of this in most depictions that's particularly tied to Mexican culture and heritage), as well as the fact that they always appear to be grinning. Skeletons are associated with death, but that isn't always a bad thing. In many circles and cultures, skeletons and skulls can serve as a reminder to accept and even embrace death, thus the oft sympathetic portrayals of the Grim Reaper. As an extension of their association with death and thus endings, they may sometimes be associated with change. They may be further used to symbolize life after death, or with one's family or ancestry. In a sense, a skull or skeleton can sometimes be a symbol of embracing life. There's also the fact that there is something inherently funny about a skeleton just getting up and walking around.

Whilst skeletons have the potential to be a little bit creepy, they're also quite humerus. There are a lot of funny skeleton classic one liner jokes such as "A skeleton walks into a bar and says to the bartender "I'll have a beer please, and a mop". They also bring us really funny puns too like "What is a skeleton's favorite thing to do with their mobile phone? Take skelfies." source: https://www.keeplaughingforever.com/skeleton-jokes

This trope is especially common in works centering around Halloween, or that have a decidedly Goth aesthetic, so friendly skeletons are especially likely to be found in Halloweentown. They can also be an example of Our Monsters Are Different. Related to Chummy Mummy, Friendly Zombie, Friendly Ghost, Friendly Neighborhood Vampire, and Wonderful Werewolf. If the skeleton is the Grim Reaper, it's also Don't Fear the Reaper. Can often overlap with Stingy Jack.