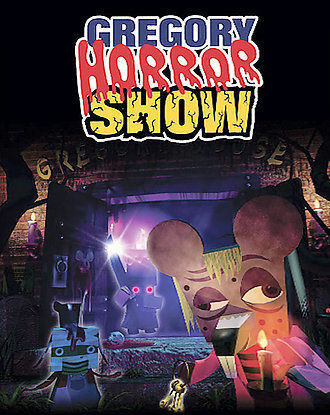 Gregory Horror Show is a CGI anime series produced by Naomi Iwata of Milky Cartoon. What can be agreed on is that it takes place in some sort of purgatory world which includes a Hell Hotel. The creator of this world is an old anthropomorphic mouse, Gregory, who also owns and runs the hotel, "Gregory House." (No, not that one.) There are three seasons, a fourth half-season on the DVDs as a side series, a PlayStation 2 game, and a manga.

The first two seasons take place in Gregory House, and take place from the perspective of the season's protagonist, known as the "Guest." The season then shows what happens to him/her after finding themselves lost and finding the hotel, checking in, and eventually trying to escape back into reality and away from the Ax-Crazy locals. The PS2 game makes use of these seasons as a base, as it has the player control a Guest trying to escape. The DVD release of the first season also includes The Gregory Gallery Tour Special, a 3-episodes sub-season in similar format but in a different setting.

The third season features no Guest character, but instead follows Gregory as he takes a ride on a sentient train to who-knows-where and comes across many familiar faces along the way. This season is a little lighter with a noticeable increase in comedic tone.

The sub-season focuses on one of the more recurring characters, Catherine, as she works as a nurse in a hospital and engages in self-deliberation about what she wants in life.

The manga, Gregory Horror Show: Another World, was created by another author and many details of the setting are so different from the anime aside from the Art Shift to the point where it seems like a Gaiden Manga (although given the nature of Gregory's world, it seems appropriate). Our guest has a name this time, Tooru Takenozuka, a 22-year-old freeter (a.k.a. NEET) who takes a room at the only apartment complex that will take him, Gregory House, while Desperately Looking for a Purpose in Life.

of a possible new season called Mystery Holiday. Details are scarce, but it seems to include a major Art Shift and a focus on more child-oriented problems and worries, as opposed to the more adult problems of the first two Guests.

The series has a minor cult following.

Not to be confused with the Rocky Horror Show.

See ya on the next trip!