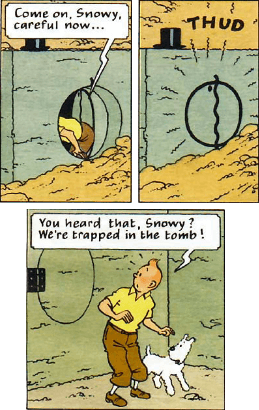 The plucky heroine has just entered the Haunted House. She opens the door and walks slowly inside. Suddenly, the door slams shut. She turns around, gasping. She has just been tricked by the Ghost Butler. One has to wonder how these people would react to automatic doors. The chronically Genre Blind say, "It must have been the wind."

In yesteryear, this was a standard feature of horror films — to show just how spooky the Haunted House was. It was used to the point where you are more likely to see it parodied than used straight. If this trope is used straight, then not only do the doors close suddenly, but they cannot be opened, preventing the heroes from choosing to leave at that moment. Now it can be used in any situation where creepiness is needed, even if there are no ghosts.

This commonly occurs in video games, forcing a player to deal with a situation such as a Boss Battle or Descending Ceiling without running away. Expect The Hero to be surprised every time this happens, even if he's encountered ten Ghost Butlers already.