Tabletop Game / Betrayal at House on the Hill 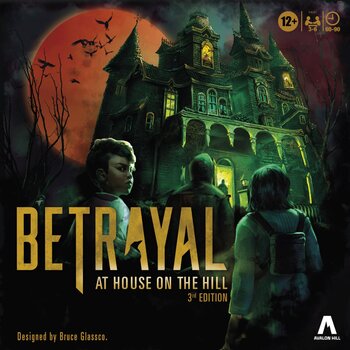 Betrayal at House on the Hill (and yes, that's the actual title) is a unique Adventure Board Game published in 2004 by Avalon Hill, with a second edition released in 2010 and a third edition in 2022. Three to six players take the roles of various character archetypes, such as a Jock, a Final Girl, a Professor, a Fortune Teller, a seemingly sweet little girl or a curious young boy... Each miniature has two different 'characters' attached to it, such as the Scientist doubling as a Preacher Man. Whatever their role, the cast find themselves trapped inside a haunted mansion and set out to explore.
Advertisement:

Gameplay involves a procedurally-generated mansion, which is created by drawing and placing random rooms. Rooms can contain items, shortcuts, and Omens. Omens can be items, new partners, or special events, but force the player to roll six dice. If the roll is lower than the total number of Omens, the Haunt begins: the Mansion's terrible secret is revealed — and one of the heroes turns on the rest. This too is procedurally generated, depending on the Omen which led to the die roll and the room in which it occurred. A wide variety of scenarios are included with the game — players can end up facing Giant Spiders, Vampires, Werewolves and other monsters, or find themselves playing Chess with Death, suddenly shrinking, or dealing with the house flooding or collapsing into a Black Hole. And since the house is built anew every time you play, every game is a different adventure.

Betrayal at House on the Hill provides examples of: