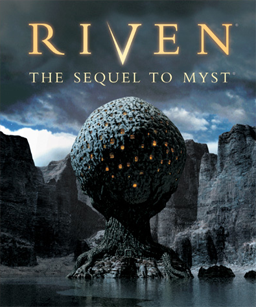 Thank God you've returned. I need your help. There's a great deal of history that you should know, but I'm afraid that... I must continue my writing. Here. Most of what you'll need to know is in there. Keep it well hidden. For reasons you'll discover, I can't send you to Riven with a way out, but I can give you this. It appears to be a Linking Book, back here to D'ni, but it's actually a one-man prison. You'll need it, I'm afraid, to capture Gehn. Once you've found Catherine, signal me, and I'll come with a Linking Book to bring us back. There's also a chance, if all goes well, that I might be able to get you back to the place that you came from.
— Atrus, explaining the plan to the Player Character in the intro.
Advertisement:

Fully titled Riven: The Sequel to Myst, a 1997 PC-Mac game that is the sequel to the world-famous PC-Mac game Myst. The story of Riven continues exactly where Myst left off.

In the previous game, a man named Atrus is part of a splintered civilization called the "D'ni" (pronounced "Duh-NEE"), who have the ability to create portals to alternate realities within special books, simply by writing the description of the reality in the book. Atrus was trapped in a stone hall prison by his two twisted and evil sons, who in turn trapped themselves in separate Ages by accident. However, an unknown character only known later as "The Stranger" appeared on Atrus' home age of Myst. The Stranger pieced together the clues of what happened on the island of Myst, and rescued Atrus by freeing him from his stone prison.

But now Atrus's wife Catherine has been trapped on the Age of Riven by their sons. What's worse is that the Age was created and is ruled over by Atrus' twisted and deluded father Gehn, who sees himself as a god, and who has now imprisoned Catherine.

At the beginning of the game, you meet Atrus again who assigns you to the age of Riven with the goal to capture Gehn in a book that was specifically designed for this task, and to rescue Catherine. Atrus opens the descriptive book to Riven and it soon becomes apparent that Riven is unlike the previous ages you have visited. The gateway image is badly distorted and it turns out Atrus is stuck writing in corrections to Riven's book to delay Armageddon due to Gehn's abysmal writing skills.

The instant you link to Riven, you trigger a trap and become stuck in a booth behind bars, and lose your trap book after a nearby guard demands it. The guard in turn ends up being hit by a tranquilizer dart and falls asleep. A rebel scout takes the trap book, frees you, and runs off. Now, stuck in Riven without your trap book, you must regain the trap book and find a way to lead Gehn into it. With Gehn safely in the prison (and Catherine free), you must then signal Atrus who will come with a linking book to bring everyone back home.

A fan-made Updated Re-release is in the works to recreate the game in a fully 3D engine, called The Starry Expanse Project

. Unlike many large-scale fan works, this one has the blessing and cooperation of the original creators, so it has a better than average chance of eventually being released.