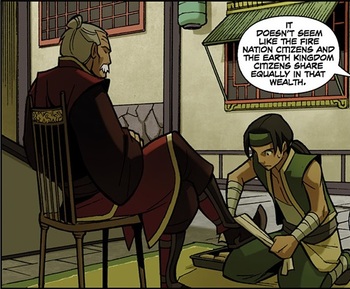 A typical scene in a Fire Nation colony established on Earth Kingdom land, with rulers and subjects Color-Coded for Your Convenience.
Captain Kevin Darling: I'm as British as Queen Victoria!
Captain Edmund Blackadder: So your father's German, you're half-German and you married a German?
— Blackadder Goes Forth
Advertisement:

A Foreign Ruling Class is a ruling class whose culture, language and/or religion are different from those of the populations they rule. Simply put, it is the other end of Ethnic Menial Labor. Different from a military occupation since this situation lasts in peacetime too.

This situation can rise as a result of the conquest of a population by another; a protagonist might be moved to overthrow this oppression. Another cause might be the acculturation of the local ruling class by another culture, perceived as more prestigious.

This can be a characteristic of the society in which the story takes place, and can explain conflicts between the rulers and the ruled.

Over time, this class can go native, or their local subjects can assimilate into their masters' culture. It is very similar to, and can be considered a subtrope of Led by the Outsider, but shares some differences in how the leader behaves.