Signs of the End Times 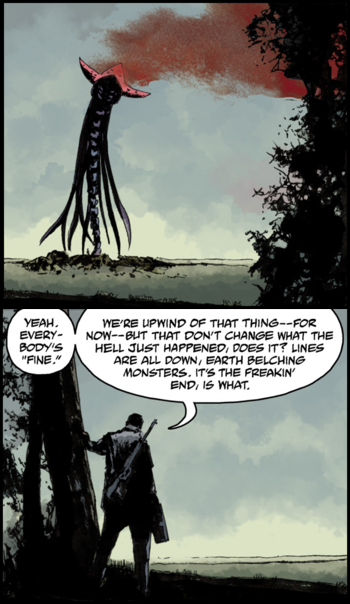 That doesn't bode well...
"Till Armageddon, no Shalam, no Shalom.
Then the father hen will call his chickens home.
The wise men will bow down before the throne.
And at his feet they'll cast their golden crown.
When the man comes around."
— Johnny Cash, "When the Man Comes Around"
Advertisement:

How do we know that the End of the World as We Know It is approaching? By the warning signs that precede it, of course. Whether The Stars Are Going Out or a beast with seven heads rises out of the ocean, or just dogs and cats living together, everyone knows that something bad is about to happen. It's a sign of the end.

Works that want to make biblical allusions will often use things from the Book of Revelation, although not always literally.

Supertrope to The Stars Are Going Out and Crack in the Sky. Subtrope to Portent of Doom. May overlap with Bad Moon Rising, Comet of Doom or Natural Disaster Cascade.

Compare Just Before the End. See also Apocalypse How, Caught Up in the Rapture and The End of the World as We Know It. For signs as in sandwich boards and posters, see The End Is Nigh.