Literature / James and the Giant Peach 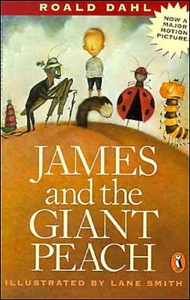 James Henry Trotter was a young boy who lived a happy life with his parents, until they were eaten by a rhinoceros (yes, really). Afterwards, he is sent to live with his abusive aunts, Spiker and Sponge. One day, James meets a strange old man who gives him a bag of magic "crocodile tongues", which can make James's life better. James accidentally drops the bag on his way home, which causes the contents to sink into the ground. Soon, a nearby peach tree starts to bear fruit, namely, the titular giant peach, which grows to about twice the size of the tree. One night, James crawls into a hole in the peach, and discovers a group of huge, talking insects (another result of the "crocodile tongues"), who befriend James, and they all decide to travel to New York City in the peach (initially by floating the peach on the Atlantic Ocean, then by flying through attaching seagulls to it) to start their lives anew.

Roald Dahl's first children's novel, published in 1961, was made into a 1996 live-action/stop-motion animated film from Disney, directed by Henry Selick and produced by Tim Burton (the respective director and producer of The Nightmare Before Christmas), with music composed by Randy Newman. Unlike the book, which is ambiguously set contemporary to its publication, the film explicitly takes place in the summer of 1958. Despite doing poorly at the box office, the film is one of the better adaptations of Dahl's work, though it can be considered... trippy.

In 2013, the story was adapted into a musical, featuring all-new songs. The soundtrack can be download for free here.

James and the Giant Peach provides examples of: