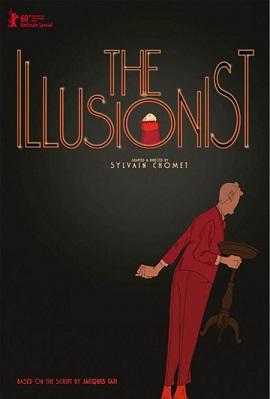 Not to be confused with the 2006 film of the same name, The Illusionist (French: L'Illusionniste) is a 2010 animated film directed by Sylvain Chomet, the creator of The Triplets of Belleville, based on an unproduced screenplay written by Jacques Tati in 1956.

A mostly silent film, set in the 1950s, about a French illusionist, named Tatischeff, as he tries to find work in a world where the stage is slowly giving way to the silver screen. His travels take him from Paris to London, and eventually a small rural town in Scotland, where he meets a young woman named Alice. Captivated by Tatischeff's illusions and believing them to be real, she leaves home with him as he makes his way to Edinburgh.

Tatischeff performs at a local music hall to an ever-decreasing audience, while Alice wanders around the city, seeing clothes that she wishes she could have. In his kindness, Tatischeff indulges her with these gifts. Unfortunately, he spends large amounts of money on them, while Alice continues to believe them to be more of his magic tricks. In order to continue in appeasing his protégé, Tatischeff takes up numerous other jobs to keep both Alice happy and a roof above their heads: being poorly treated and degraded in the process. After blossoming into a pretty young woman, Alice finds love with a local man working at a library across from their hotel.

The movie was meant to be Jacques Tati's love letter to his daughter in 1956. Tati's middle grandson, Richard MacDonald, sent a letter to famed movie critic Roger Ebert in which he [MacDonald] discusses his distaste for the film. You can read the letter here