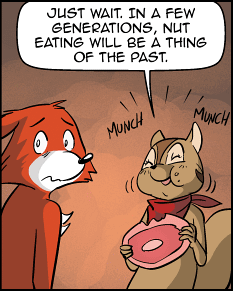 "That means you eat... wolves?"
"Just the pups. Grown-up wolves are way too chewy."
Sometimes, with Carnivore Confusion, all animals are omnivores. Sometimes, only the evil characters eat meat; herbivores eat plants, and "good" carnivores go vegan or eat bugs/fish. Sometimes, carnivores eat meat, herbivores eat plants, which is accepted as the law of nature as there's nothing anyone can do short of replacing their digestive system. But in some cases, one of the herbivores, a prey animal, might get upset... might get a little obsessive about the injustice... might "crack" a little. Followed by the terrifying (or hilarious) sight of a wildebeest trampling a lion to death and feasting on the corpse.
Advertisement:

This trope need not be invoked in vengeance or uprising, but does usually affect a herbivore character that is least a little insane. Often appears in Scavenger Worlds, where scavenging carrion is even considered normal for herbivores.

A subtrope of Carnivore Confusion. Contrast Vegetarian Carnivore for when a normally meat-eating animal decides to switch to a vegetarian diet. No direct relation to Extreme Omnivore however, since the latter refers to actual omnivores.

That elephant ate my entire platoon.

That elephant ate my entire platoon.