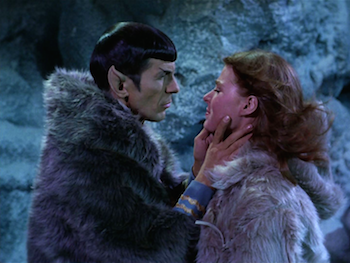 The Power Trio beams down to the planet Sarpeidon, intent on evacuating the denizens before the sun goes supernova. The only person they find is a librarian called Mr. Atoz and his clone army. Guess the library just wasn't getting any volunteer workers. Mr. Atoz tells Kirk and co. that everyone has gone already. Gone where? "Wherever they wanted to go." Mr. Atoz invites Kirk and co. to peruse his library, containing images of Sarpeidon's history. Because even if the sun's going supernova, there's still time to read! Or at least look at moving pictures. Kirk looks at images from a pre-industrial age. Bones and Spock look at images from the planet's ice age. Kirk hears a woman's scream and jumps to investigate. "No, wait!" shouts Mr. Atoz. "You haven't been prepared!" After a psychedelic light show, Kirk disappears and reappears in something right out of The Three Musketeers. Spock and Bones ignore Mr. Atoz's warnings and jump in after Kirk, only to find themselves on the cliff of an icy mountain.

Now, all they have to do is go back through the portal. Yeah, not as easy as all that....

Notably also the last episode of the series if you put them in order by Stardate. At that time, television series rarely had an episode written as a series finale, but simply a last episode to air. This episode, with its funereal tone and focus on the relationship of the central trio, is generally considered one of the highlights of the often-shaky third season, and a much better series finale than "Turnabout Intruder", with an absolutely killer last line.