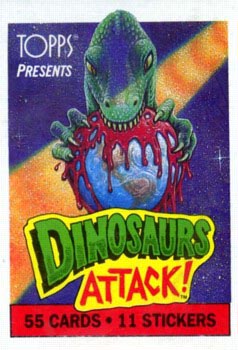 Hey, we're still in The '80s: Deinonychus here, not that pipsqueak Velociraptor!
Advertisement:

Dinosaurs Attack! is a trading card series by Topps, released in 1988, and containing 55 cards and 11 sticker cards. The card series was created as a follow-up to the successful trading card series, Mars Attacks!, and was similarly intended as an homage and a parody of 1950s B-movies.

The "story arc" of the card series is that a scientific time-travel experiment has gone horribly wrong, transporting dinosaurs of many varieties from their prehistoric world to modern times. The dinosaurs immediately wreak havoc upon mankind and chaos reigns as the scientists work to reverse the time-travel effect. In the end, the Supreme Monstrosity, patron deity of the dinosaurs (nicknamed "Dinosaur Satan" by some fans; just look at him!

) intervenes, trying to stop the scientists. The lead scientist, Elias Thorne, sacrifices himself to the Supreme Monstrosity so his wife, Helen, can succeed and send the dinosaurs back to their own time, tearing the animals apart in the process.

The series is best known for its incredibly violent content and blood-spattered artwork. Scientific accuracy is, needless to say, not to be seen here. The old Dinosaurs Are Dragons and Prehistoric Monster tropes are brought out in full force and in a more extreme way than ever before. The whole series

Despite the company's hopes, Dinosaurs Attack! did not achieve commercial success. Tim Burton was planning on making a movie,

but dismissed it when a slightly less obscure dinosaur movie was released. Instead he made Mars Attacks!

Eclipse Comics intended to release a three-part miniseries based on the cards, but ended up only releasing the first issue; IDW eventually republished that issue and had four new issues made to finish the series.

Note: The images in the cards aren't necessarily Not Safe for Work, but they can get very, very gory, to the point where it's hard to believe they're from a kids' series. You will get odd looks if you view them at work.

This card series contains examples of: