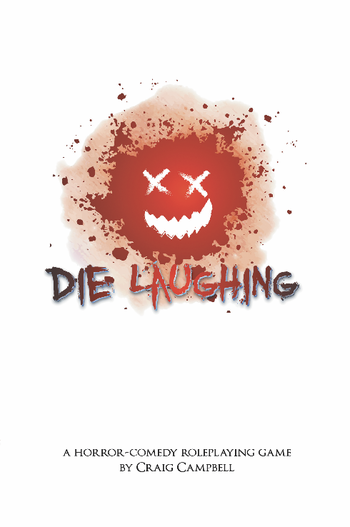 The game that puts the laughter in slaughter.
Die Laughing (not to be confused with the trope, but hopefully it's everyone's reaction) is a short-session, GM-less Horror Comedy Tabletop RPG by Craig Campbell, published in 2019 by NerdBurger Games.
Advertisement:

Each player plays a character typical of a horror movie. One player takes on the role of the director who rolls to determine exactly what's going to happen in the scene, and the player next to them is the main character of the scene, with these roles rotating around the table from scene to scene. Each player outlines what they want to do in the scene, and rolls a number of dice known as their "Life Pool" against a target number (TN) determined by the scene's rules. Each dice result equal to or higher than the TN is considered a "hit", and if the number of hits exceeds the stat being tested on the player's character sheet, they succeed the check. If they fail the check, the character fails whatever they were attempting in the scene (which doesn't necessarily mean they die, depending on what's happening).

If a player's Life Pool is reduced to 1, the character is considered "wrapped", and is killed, with additional rules taking effect depending on which monster is being used during the session. The player in question then becomes a producer, able to influence the story in various ways.

The game can be purchased here