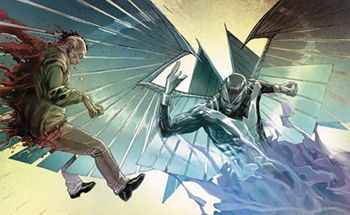 Sometimes Power Gives You Wings; every so often however the Wings Do Nothing — after all bone wings are cool but aren't as useful as Combat Tentacles or Feather Flechettes... or are they?

They are, if characters with wings also have a cutting edge, making them Absurdly Sharp. A variant of this is having plane-esque wings that are sharpened/given cutting edge; this often comes up more in flying vessels and occasionally Jet Packs.

See also Master of the Levitating Blades (for floating weapons positioned like wings) and Helicopter Blender. Not to be confused with Razor Wind.

The Fire Vellumental can shoot out razor-sharp wings that stick to the combat board.

The Fire Vellumental can shoot out razor-sharp wings that stick to the combat board.