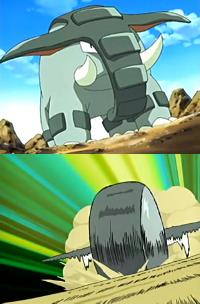 It's not just for hedgehogs.
Basically a three ton pill-bug with a bad stomach acid problem. Folds itself into a wheel shape and is able to propel themselves with great speed, using their enormous weight and sturdy armor to crush anything unlucky enough to be in their path to paste.
— DRG Miner's Manual on the Q'ronar Shellback, Deep Rock Galactic
Advertisement:

The weaponized use of Be the Ball, this is when a character curls up into a ball and careens forward, destroying everything in their path. Woe especially to those who are on a downwards-sloping hill, in which the attack gets additional gravity power. A lot of the time, characters who use this type of attack have parts on the back that enhance this attack, such as rock-hard armor, blades, or spikes. See also Spin Attack, Sphere Factor, Dash Attack, and Slide Attack. Compare Monowheel Mayhem, which describes a type of vehicle that may be able to execute this sort of attack.

Boo Jack's rotund figure lets him turn into a ball and his suit is filled with spikes.

Boo Jack's rotund figure lets him turn into a ball and his suit is filled with spikes.