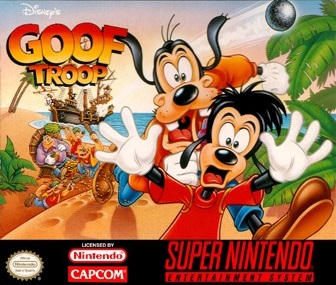 Listen to the boop on this shit!
Advertisement:

Goof Troop is a 1993 Action-Adventure game for the Super NES, released by Capcom, based on the show of the same name. This game has an unusual pedigree - the lead programmer was none other than Shinji Mikami himself, and the room-by-room progression of this game was used as the basis for the first build of Resident Evil a couple of years later.

Goofy's Jerkass neighbor, Pete, gets kidnapped by pirates who mistake him for their boss, Keelhaul Pete. And so it's up to Goofy and Max to rescue Pete from the pirates and save the day. That's pretty much it as far as story goes.

The game is considered by many to be an underrated Cult Classic, managing to avert the trend of The Problem with Licensed Games by being a heck of a lot of fun, especially in multiplayer.